On the stage in Le Marche, Italy 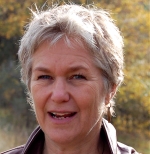 XTamsin Hickson Background:
Tamsin Hickson was born in Cape Town, lived in the UK for twenty years and moved to an olive farm in Le Marche, Central Italy, with her sons and a ginger cat in 2003. Since then she has married a local man, become vaguely fluent in Italian and learnt a range of new skills from teaching English to chasing buffaloes out of the vegetable garden.

Check out her Catching Larks blog. You can also reach her by email. 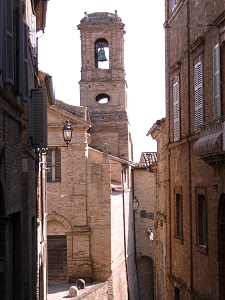 One Saturday night earlier this year I waited backstage muttering “l’allodola” under my breath, while a young jazz musician with a bright white satin tie covered in musical notation chatted to me, clearly trying to cheer me up.

“I’m really English,” he said in Italian, “aren’t you impressed by my Italian?”

Applause drifted back stage and it was my turn. Once I reached the lectern I was comforted by the way the glare of the spotlights prevented me from seeing the audience. I took a deep breath, and launched into an awkward reading in Italian of the first two pages of “The Waves” by Viriginia Woolf.

This is just one of a succession of embarrassing situations that I have found myself in since I moved to Central Italy eleven years ago. I first fell in love with the idea of Italy when I was fourteen, discovering the world of Don Camillo in the yellow bound Victor Gollancz editions of Giovanni Guareschi’s short stories, borrowed from our local library. The tussles between the village priest and the communist mayor Peppone conjured up a world far away from suburban South Africa, one that I imagined to be the creation of a highly imaginative and skillful author.

At university I drowsed through lectures on the history of architecture on warm afternoons, paying scant attention to the buildings in Rome, Florence and Venice projected in crisp black and white on the slide screen, sure that they must be isolated works of art in a sea of modern buildings. 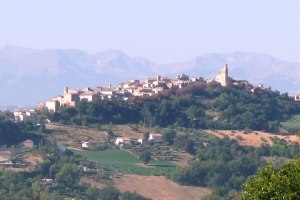 I was so amazed on my first trip to Italy in my early twenties to discover that the buildings I had studied were surrounded by others, equally as beautiful, that I began to sketch frantically, wanting to document everything I saw. I came back again and again, drawing and learning to paint in watercolor and then on family holidays with my two small sons, but it was sixteen years after my first trip here that I finally found the courage to move here. At the age of forty I started learning Italian, chose a house in a town where we knew an Italian family, and we moved.

Moving countries is an enterprise best approached with extreme caution, yet it is something that only the most reckless of people would undertake. Pulling up your roots and cutting yourself off from your support network is so radical that it is best fueled by a strong motivation. Mine was the desire to find out more about a country I was fascinated by, and I have not been disappointed. Well-meaning and scandalized friends mentioned Tobias Jones The Dark Heart of Italy in hushed tones, and many still mutter Berlusconi’s name, or wonder out loud how I can live in a country with “Italian” politics, but mine is a mature love and the fascination the country holds for me is not limited to the sun washed terracotta tones of renaissance buildings but also the chaotic state of the Italian economy and the conspiratorial way that Italians conduct even the smallest negotiation in their lives.

Two years after I moved here I married a local man, whose political statements make me wonder whether we are really enacting a Guareschi short story, whether this is the Po Valley in post war Italy, or rural Le Marche in the twenty first century.