Once upon a time, a young man from a faraway land met and fell in love with a young woman from that same faraway land, who loved him in return. They planned to marry, but when the young man’s grandmother consulted the astrological signs, she declared, “Over my dead body!” (rough translation). Heartbroken, the couple parted. 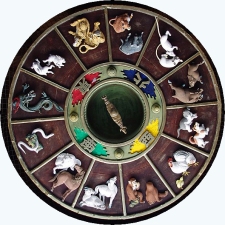 Although I felt sorrow for our foreign graduate student and his would-be fiancé, I was awed by the power of grandma’s astrological matchmaking. This saga came to mind as I was tossing out old files and came across a Chinese restaurant placemat I had saved over 40 years ago.

I was flabbergasted the first time I saw the new placemats at one of the Chinese restaurants we frequented. There, beneath the empty plate and chopsticks, was my introduction to eastern astrology: the Chinese zodiac–an animal representing each year of a 12 year cycle with a brief description of each.

I was…am…a Horse. Popular and attractive to the opposite sex. How could I argue with that? Ostentatious and impatient. Maybe I’m a little Impatient. One who needs people. Sometimes. OK, so the placemat was off by a gnat’s eyebrow, but that was me!

My dining partner, a professor from China, scoffed. How could the Emperor and everyone else born in the same year of the 12 year cycle be alike? Clearly, he wasn’t a Horse.

Now that I’ve retired and become accustomed to being a Horse, I had a chance to look further into Chinese astrology. It’s far more involved than just the 12 year cycle with its 12 animals.

To start with, before the fortune-telling can really get cracking, four components or “pillars” of birth must be known: year, month, day and hour. Each pillar, not just the year, is one of the 12 animals; each conveys different insight. There are thousands of possible combinations.

That’s a relief, because when I looked beyond the placemat, I found very different characterizations of the Horse. Along with a few nice words, all of the non-placemat descriptions said that I talked too much. Some said I could be fickle, stubborn or worse. Me! Can you believe it? What happened to popular and attractive to the opposite sex?

Even though those Horse characterizations were based on only the year, not my inner (month), true (day) or secret (hour) animals, they were depressing. As an afterthought, one did suggest that I would give up everything for love. (I showed that to my wife.)

Why bring up this disappointment now? Well, if you’re not aware, a new Year of the Horse begins on 31 January 2014. No matter the torment I’ve suffered with non-placemat characterizations, I just assumed that this being my year would be like “Hey! This is my year!” Guess what. That’s not how it works.

A Lawless Land (from an American Voice in Mexico)