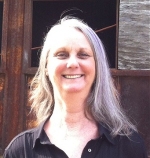 XPamela Foster Background:
Pamela Foster grew up in the Pacific Northwest and now lives in the Ozark Mountains of Arkansas with her husband, Jack, and his PTSD service dog, Chesty. She has written two contemporary novels, a memoir, a humorous travel memoir, and a western. Foster is a strong advocate for veteran's rights. and speaks at conferences and veteran's groups around the country.

Pamela and Jack's adventures in Panama are described in her Clueless Gringos in Paradise book.

Since marrying my husband just shy of twenty-five years ago, we have lived: 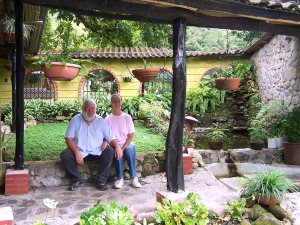 When you move this often, your riches are not stored in a bank or safe deposit box.

You may be wondering why, since every single place we have lived has been beautiful, we continually sell everything – buy high, sell low is our motto – and move on to the next adventure.

In ’65 my husband, Jack, stepped on a land mine just outside Danang. There was a lot of that going on back then in that steamy corner of the world. He deals with his physical wounds in a variety of ways including meds and Marine Corp-instilled will power. But it’s the mental shrapnel of that war, post-traumatic stress, that is his biggest challenge. 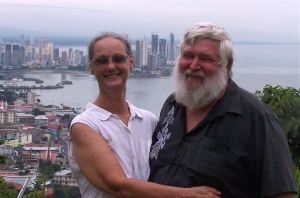 One of the symptoms of PTSD is that even after the trauma is over – of course it’s never really over – a person’s adrenaline levels remain high. This creates a need for adventure, challenge, risk taking. So when the blanket of gray descends over Jack pushing him into isolation and depression and thoughts of suicide, we sell everything and move to a new fresh start. It’s not necessarily a good coping device, but it has made for a life of adventure.

Heck, in between moving from place to place, we packed one change of clothes each and backpacked for six months around Thailand, Nepal, and Vietnam. But times change, we all age. There comes a time when sixty-seven pieces of shrapnel become too heavy a weight to bear with Marine Corp Ooorah. Comes a time when fifty years of roaring adrenaline and constant overcoming begins to show its effects on the body and on the brain. Comes a time when the doctors speak words like dementia and irreparable damage.

Comes a time to settle into a quieter life.

But you’ve already picked up on the fact that Jack is a Marine, right? He will not go quietly into this good night. He will rage against the darkness to his dying breath. As the wife of a Marine, I will plead, and force compromise when I can, and insist on pointing out all the reasons he needs to slow down. But in the end, I will go where he goes. As the heat of summer blesses us, Jack glares at the winter that must follow and makes plans to escape the ice and snow in Chiang Mai, Thailand.