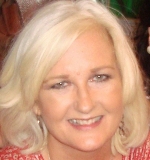 XSherri Matthews Background:
Sherri has worked in both the legal and medical fields but her defining and most fulfilling career was that of full-time mum for many years to her three, now grown children. Widowed young, remarried, divorced and remarried again, Sherri has faced many challenges, both in her home country of England and in California, where she lived and raised her family for almost 20 years.

The call of the pen beckoned throughout but it wasn't until 2011 when Sherri lost her job due to office closure and her daughter was diagnosed with Asperger’s Syndrome that she began to pursue her true calling.

Today, and while writing her first book*, Sherri writes articles, poetry, short-stories and flash fiction, some of which have been published in national magazines (UK), as well as writing on her blog, A View From My Summerhouse, and guest blogs for a variety of online sites.

Today, Sherri lives in Somerset in the West Country of England, happily with her husband, daughter, two cats and a corn-snake called Charlie (her daughter’s, acquired after many years of persuasion).

You can also reach Sherri by email

As a young teenager growing up in England in the 1970’s, America, for me, meant three things: Movie stars, pancakes with maple syrup and metal mailboxes with little red flags. Maybe it was from watching all those American shows or maybe from reading too many noir detective thrillers, which I devoured.

Or perhaps I had some deep, inner knowledge that although I had no plans to become a movie star, I would end up living in America one day, eating American pancakes and collecting mail from my very own mailbox, perched on a wooden post at the end of my driveway, just like in the movies.

Certainly, I had no indication back then of the important part that my mailbox, and the sending and receiving of letters, would play in my life but letter writing was something that my mum drummed into me from an early age.

Like any child, I adored Christmas but I wasn’t so keen on having to write my thank-you letters a few days later. Mum insisted that I took the time to thank my relatives who had kindly given me presents and even though it was a chore, I did understand the importance of these letters. So much so, that I made sure my children did the very same many years later, love it or hate it!

When I was 17, I was miserable. I had a job I hated and a boring boyfriend. Something in me snapped one day and I knew that I had to change my life. By the time I was 18, I was single, had changed jobs, passed my driving test and was the proud owner of my first car, a battered rust-heap of a Mini. I adored it and the newfound freedom my car gave me.

Now working at the Post Office, I set about getting to know my new colleagues who quickly became good friends even though they were all older, including the janitor, a man called Reg. He was retired but enjoyed his part-time work at the Post Office, which gave him ‘extra pennies’ and something to ‘keep him out of trouble’ as he was fond of saying.

Reg never complained about anything, a familiar and welcome sight every morning when we arrived to start the day. With his shirt sleeves rolled up, revealing the tanned, sinewy arms of a man used to hard labour and displaying a tattoo from his military days, there he would be, without fail, an ever-present cigarette dangling from his bottom lip, whistling cheerily while pushing a broom around the floor before it was time to open up for the waiting customers.

He made tea and coffee at break time and we all enjoyed the banter, cheeky jokes and the laughs. He might have seemed old to me then (he would have been in his 60’s) but he walked or cycled everywhere and was as fit as a fiddle, despite his pack a day cigarette habit. So fit, that sometimes during my lunch hour, we would head out to the local tennis courts and knock a few balls around. He had me on the run let me tell you!

Sometimes, he told us of his years serving in the Navy during World War II and how soon after he had married, he had to leave his new wife for a long time while he fought for King and country somewhere out at sea.

He mentioned, only once, that his wife had happily announced her first pregnancy just before he had to leave again but that she had lost their only child while he had been away. They never had children and when he let us in to his very private world, it was the only time I ever saw a glimpse of the deep sadness hidden behind the twinkle in his eye.