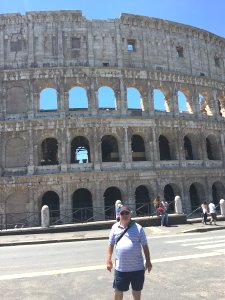 Sitting in my seat about halfway down the aisle I could feel the bus slow down and move over to the curb. I pulled my eyes away from the book I was reading and glanced out of the tinted window to my right. Just a few feet from my face, on the other side of the glass, the busy sidewalk teemed with sightseers, tourists, and vendors hawking souvenirs.

Three Roman soldiers complete with traditional garb and helmets were posing with a smiling young woman as her male companion snapped a picture. The hoard of pedestrians were moving down the sidewalk in the opposite direction in which our bus was rolling to a stop.

Just as I reached for my backpack the familiar voice of our tour director came over the sound system.

“We will be disembarking the bus and exiting to the right.” She said, looking at the people walking by.

“Please stay together and walk as a group.” She continued.

“It’s going to take about fifteen minutes before we reach the Colosseum and begin our tour.”

She turned her head and once again focused her attention on us, the bus load of her charges whom she had been shepherding for the last two weeks. “It’s important we stay together.” She repeated.

It was day twelve of our Grand Tour of Italy. We had just arrived in Rome for our last three days of our tour. The past two weeks had been a whirlwind of activity. Starting in Milan, moving on to Venice, on down to Florence, and then off to Assisi, Pompeii and Naples, our tour had passed like a blur.

The thirty-three other members of our group had quickly become like an extended family to Diana and me. After a few days of warming up to each other, we found ourselves dining, partying and joking around like we had know each other for years, although we hailed from all over the U.S. and comprised a wide range of ages and walks of life.

But it was winding down now. Rome was our last stop. And the Colosseum was going to be the biggest attraction of all.

I had read about this structure since I was a little boy in school. Built by the Roman Empire, used as an arena for Gladiator combat, purported to be the place where Christians were fed to the lions; the Roman Colosseum stood out in my mind as one the most significant buildings in the history of human civilization.

We got off the bus and joined the throng marching down the sidewalk. The sun was bright. The mood was festive. We were ready for another adventure.

When I retired four years ago I really didn’t give much thought to traveling abroad. It wasn’t something I was dying to do.

I anticipated spending more time with my family and sometimes taking in local points of interest, which included scenic drives to out-of-the-way places and occasional trips to nearby National Parks and Monuments.

That would be it, I thought. That would be the extent of my traveling. Getting on an international flight and spending ten to twelve hours on a plane just wasn’t on my radar.

Then one night I stumbled across an ad on the internet for a fall tour of selected cities in Germany which included an outing at the famed Oktoberfest in Munich.

Being of German ancestry, I thought that would be a very interesting trip to take and presented the idea to Diana. She thought it would be fun as well and after a few days of deliberations we booked the tour eight months out.

Well, needless to say, we had a great time and saw the sights; castles, cathedrals, cobblestone streets, Lederhosen and beer.

After we got home we were hooked. Getting out the travel catalog we paged through the colorful pictures and, at Diana’s suggestion, we decided on Ireland and booked a tour for the following summer.

That trip also proved to be a wonderful experience. Kissing the Blarney Stone was one of the highlights of the trip.

This year it was Italy.

I made countless trips to the library boning up on my knowledge of all the places we were going to see and the culture we would be experiencing. A couple of articles on the Colosseum and websites with dozen of pictures of the famous edifice seemed to satisfy my curiosity for the time being and I thought I was ready to see it for myself.