Every warm weekend we lived on the boat, ignoring the house. The idea of simplifying our lives and moving onto a sailboat with nothing but what we could toss aboard seemed more attractive by the minute. 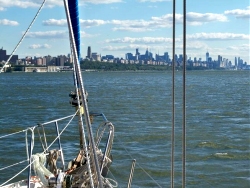 People we discussed this with thought we were nuts. “It’s not a normal way of life!”, “That’s crazy talk.” “The water is very deep. You’ll drown!” “Sharks, what about sharks!” “Where would you go to the bathroom?” We heard it all. We eventually moved onto our sailboat for the summer months just to try it out. We loved it so much that over the following winter we got the house ready for sale. Much to our surprise it sold quickly and we moved into an apartment in the city for the winters and spent summers on the water. “Let’s chuck it all and sail away!” I said. Deb looked at me and said “OK!” No arm twisting there! We started to formulate a plan.

To be honest we had been thinking about the cruising life for many years, and we had planned on June 1st of 2013 as the “Sail Away” date. Losing the pension was a shot across the bow of our dreams, but Instead of submitting to our fate, we looked for other avenues to get out there on the water. Turns out Debra’s employer had an office in Jacksonville Florida. We talked it over a bit and Debra decided to take a transfer. I decided that after 31 years of service I had enough of the engineering life and took retirement.

Debra selected a date to start in her Florida office which would be perfect timing for a trip south. We both had accumulated plenty of vacation time, so we decided to sail the boat out of the Great Lakes, through the Erie Canal, down the Hudson and into the Atlantic where we followed the coastline to Jacksonville Florida.

We had quite the adventure. Even with some extreme conditions and almost getting run down by a tug and 300 foot barge at anchor, and having lightning strike the water near us off Hilton Head, we still had a blast. The whole trip just reaffirmed our commitment to this salty life afloat. We made the trip in five weeks. We tied our boat up in Jacksonville Beach Florida in the sunshine. Debra went back to work, while I lay around in the Sun and thawed out after fifty five years in Western New York.

How can we afford to do this at such an early age? Simplify.

We are not rich by any means. The key for us was not overspending on consumer goods, home improvements, college, weddings, etc. Keep it reasonable. We determined long ago that we were not going to put ourselves in a money pit that we would have to dig out of when we were older. We did not live a boring life either. We took vacations, purchased boats, owned a nice house in the burbs and all, but we drew the line on new cars, kitchen remodels, and those material goods that add up. When we finally sold the house we had for 25 yrs. we found ourselves with zero debt and two 401k’s that did OK. Not great, but OK. So here we are debt free and with enough savings to live for some time on a sailboat. 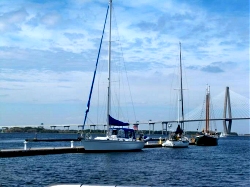 The key was to keep things simple. Unload all the baggage. Be a light traveler. There are many articles and stories about simplifying your life out there. It’s a hard thing to do, but not impossible. You would not believe the stuff we got rid of after all those years. Amazing what we had accumulated and even more amazing is we didn’t even know half the stuff existed! Example; we found a bugle. An old army bugle. No one knows where the bugle came from. There were a few others as well. Our biggest disappointment was the furniture. All the money we spent on good furniture and nobody wanted it. We couldn’t give it away. So, most of it went to charity. As we cleared the house out, and finished the garage sales, gave away stuff to charity, we were left with a small pile that could fit on the boat. It actually felt awesome shedding all those years of material goods and accumulated junk. We were free. Free to travel.