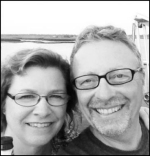 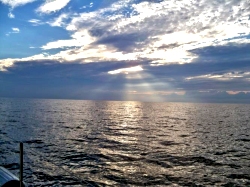 My desire to sail was always my little secret. Since I was a kid I was always dreaming of sailing a boat. I just never expressed that desire to anyone. Hey, there are worse desires a married guy could have, like buying a motorcycle and running away with a cute little waitress at a diner in some old mid western town on your way to Cali. I think that was a Bob Seger song. Anyway, I had wanted to get into the sport of sailing, but being a professional procrastinator, I put it off. When Debra’s Dad passed away, I related to her that he regretted spending so much time at work and not enough time at play. That got me moving. I eventually took lessons at the Schooner’s Club on the Genesee River in Rochester where I learned to sail. The first time we raised the sails on a warm evening with the sun low on the horizon, and not a sound was heard except the birds and the hull rushing through the water I knew I was hooked.

I told Debra, “Deb, you need to do this!” She replied, “No. Don’t think so”. I pleaded, poked, prodded and annoyed. All the things I do best, but to no avail. So I did the only thing a married man in his late 30’s would do in this situation. I bought a boat! I made my announcement to the family, and piled everyone into the Van for a look at what Daddy did. Deb was thinking Sunfish or something small, which was funny. I swore I told her it was twenty five feet long. When we drove up under it while it sat on a cradle she looked so surprised, speechless actually. Then, I think the kids heard the first swear word ever to come out of their mother’s mouth.

Soon afterward, Deb was in sailing school. Apparently she was thinking her idiot husband might not know what he’s doing out on the water, and her babies are not going out on the big lake without backup. She did great. She also loved it! Imagine that. A sailing family was born. 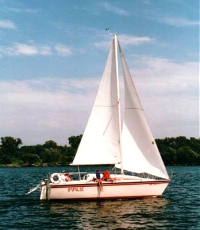 Our first boat had the name Impulse. An appropriately named vessel if there ever was one. She was a twenty five foot sloop. She was affordable, had a deep fin keel and a fast hull. There was room for a close knit family of four that didn’t mind a little overlap. We spent our summer days sailing upwind towards Canada as far as we could get before we had to turn her around to make it back before dark. The wind would usually die on the way back, and we would have to listen to the Johnson outboard scream its guts out the last fifteen miles. Some days we just dropped sails, and took a nap. We looked like seals lounging on an abandoned boat. A few times we made it across the border before turning around singing “Oh Canada” as we pointed towards the south shore. We sailed, we motored, we raced, and we had fun. Most weekends we lived aboard, enjoying the fresh air and my snoring. This is where the idea of living aboard full time entered into our brains. We eventually bought a bigger boat and made it over to Canada and the Thousand Islands for weeks on the water. We were having a great time. Well, as good a time as you can have with two teenage girls aboard.

With the kids off to college, and starting their lives, we were left with a four bedroom, two and a half bath house full of stuff that was as quiet as a church on Tuesday. We started asking ourselves if we wanted to continue to live in this cavern of unused space. Retirement was a few years off, and my employer just filed for bankruptcy. Turns out the pension went bankrupt as well and the economy wasn’t looking too pretty either.