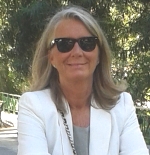 XSusan Athanasakou Background:
Originally from Leeds, England where I met my Greek God whom I have now been living with in beautiful Greece for over thirty years.

I love spending as much time as I can on the beach and when not there I can be found reading a good book with a cup of coffee at hand or tending my garden.

The rest of my time is spent with my family which consists of my Greek God of a husband, Greek God minor (son) and Greek Goddess (Daughter) plus two overweight lovable pug dogs, Maurice & Hugo.

Please check out my Greeker than the Greeks website. You can also reach me by email. 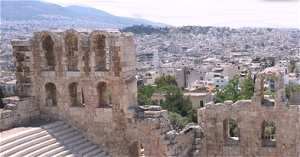 Having lived here for thirty seven years I can say that Greece is truly a wonderful place to live. The Mediterranean climate gives everyday that holiday feeling. There’s lots to see and do, be it lazing on a beach all day or visiting one of the many archaeological wonders and museums, or just sitting at a pavement café people watching, one of my favourite pastimes.

Athens, the Capital of Greece is very cosmopolitan, definitely on a par with other European Capitals. So many up to date modern bars and restaurants serving multi ethnic dishes alongside the traditional Greek tavernas. I think you are able to find anything that you could buy in London. There are plenty of shopping centres carrying all the well known brands from high end designer clothes and accessories to good old Marks and Spencer and British Home Stores.

The real Athens though is the area around the Acropolis, Plaka, Monisteraki and Thission, it is very busy and usually packed with tourists and prices may be slightly higher than elsewhere but it is well worth a trip.

Do visit the National Archaeological museum; it has the finest collection of Greek antiquities anywhere in the World.

The centre of Athens is quite compact and easy to navigate it’s difficult to lose your bearings when the Acropolis can be seen from almost all parts of the city.

To go further afield use the excellent modern Metro underground system, it’s one of the cleanest and most efficient undergrounds in the World. It’s well signed in English as well as Greek, as is all of Greece. 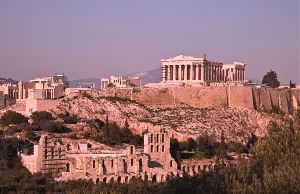 Three quarters of the Greek population (four million)live in Athens making it a busy place, the cost of living here is much higher than in other parts of Greece, the same being the case in all European Capital cities.

I personally would not like to live in Athens unless it was in the Northern suburbs, Kifissia maybe or along the coast in Glyfadha or Vouligmeni but here property prices and rents are sky high!

I do love to visit Athens though which is only about forty five minutes by car from Loutraki where we live, a lovely little coastal spa town, very popular with tourists.

Mainland Greece, the Peloponnese and Northern Greece have many large towns, most of them having an old quarter and being surrounded by picturesque small villages.

The Mani an area of the Southern Peloponnese is very popular, lots of square, tower-like houses. Anyone who has read Patrick Leigh Fermor’s splendid books will know about this area of Greece especially from his book “Mani”

All major Greek towns have all the facilities that you might need: good hospitals, dentists and private doctors. There are always plenty of banks and post offices. The Greek postal service is excellent and very reasonably priced. None of my parcels or letters have ever gone missing!

The bus service going to and from the nearby villages are usually very good, there is nearly always a bus that goes to Athens. 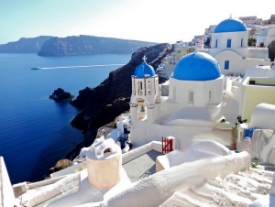 The water supply is very good all over Greece and tap water safe to drink. It always amazes me that England, with so much rain can have water shortages and hosepipe bans, while here in Greece, with much less rain, I have never experienced that.

If I were moving from the U.K (or elsewhere) to Greece I would recommend living on the coast. Some of the world’s most beautiful beaches are in Greece. Myrtos beach on the Island of Kefalonia, being the most famous. Most Greek beaches have been awarded the Blue flag from the E.U for being clean.

The coast of Greece is strewn with pretty little fishing villages, their harbours flanked with traditional tavernas and cafes, I love to sit at either of these and just watch the world go by.

If thinking of moving permanently to Greece, I would choose a place with easy access to the nearest large town. After a “certain age” you never know what is round the corner health wise!

Smaller towns and villages have hospitals that might not be able to cope, that’s if they have a hospital, some have only a medical centre.

For the same reason I wouldn’t choose to live on a small out of the way Island. Many Islands, especially the larger well-known ones such as Mykonos and Santorini are packed from May to the end of October and quite deserted in the Winter.