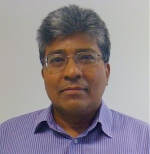 XProfessor Arne Akbar Background:
Professor Arne Akbar is a basic scientist who trained in biochemistry, physiology and immunology at Kings College London where he received a 1st Class Honours Degree in 1978. He obtained his PhD in Pathology and Immunology at Southampton University Medical School in 1982. After this he spent 3 years as a Postdoctoral Fellow at the Sloan-Kettering Cancer Centre and Cornell University Medical School in New York.

He then took up a second Postdoctoral Post in the Department of Clinical Immunology at the Royal Free and University College Medical School where he stayed for 17 years, achieving the title of Professor in 2002. He is currently Professor of Immunology at University College London where his research group consisting of scientists, clinicians and students are focused on the investigation of mechanisms of decreased immunity during ageing.

Professor Akbar can be reach by email.

The number of people aged 60 and over will reach 2 billion by the year 2050. Older subjects have increased morbidity and mortality after infections and it is estimated that 90% of the 10,000–40,000 excess deaths attributed to influenza annually in the United States occur in individuals who are ≥65 years of age. Therefore the care of the elderly will comprise a disproportionately large portion of overall healthcare costs in the future. This problem is compounded by the fact that one of the few proven strategies to boost immunity, namely vaccination, is only between 17-53% effective in older adults when compared to 70-90% in young adults. In addition, there is a three-fold increase in the prevalence of community-acquired pneumonia and a 20-fold increased prevalence for urinary-tract infection in old compared to younger cohorts. The progressive decline in immunity, termed immune senescence, makes older individuals susceptible to all these infections and also to cancer. It is therefore essential to understand reasons why immunity decreases and whether it is possible to counteract some of these changes. In particular a key goal is to determine whether age associated defects in immunity are reversible.

My research group at UCL (University College London), comprising of scientists, medical doctors and students have published studies showing that ageing is associated with decreased functions in white cells known as T lymphocytes. Interestingly this was not a passive event where the cells, like old generals “just fade away”. Instead, the decreased activity of these white cells is actively controlled by a molecule known as p38 MAPK that acts as a brake to prevent certain cellular functions. Of interest, the brakes could be removed and function restored by using a small molecule inhibitor of p38 MAPK. This suggests that in principle, old T cells could be rejuvenated by drug treatment. The questions that arise are first, what turns the brakes on in the first place and second, how does taking the brakes off rejuvenate the cells?

In a new study, published recently in Nature Immunology, we show that p38 MAPK is activated by low nutrient levels, coupled with cell signals associated with senescence – the ageing process within cells. It has been suspected for a long time that nutrition, metabolism and immunity are linked and this paper provides a prototype mechanism of how nutrient and senescence signals converge to regulate the function of T lymphocytes. The study also suggests that the function of old T cells could be restored by blocking one of several molecules involved in the process. The take home message from this is that diet, immunity and ageing are linked but we don’t yet know how.

In a second paper, my group showed that blocking p38 MAPK boosted the fitness of cells that had shown signs of ageing; improving the function of mitochondria (the cell’s batteries) and enhancing their ability to divide. Extra energy for the cell to divide was generated by the recycling of intracellular molecules, a process known as autophagy. This is somewhat akin to spring cleaning your house and rediscovering useful things that you forgot were there. This highlights the existence of a common signalling pathway in old/senescent T lymphocytes that controls their immune function as well as metabolism, further emphasizing the intimate association between ageing and metabolism of T lymphocytes.

At present, we are taking this research one stage further, to put our money where our mouth is, by testing whether a p38 inhibitor, that has been developed by the pharmaceutical company GlaxoSmithKline Ltd., can used to treat older humans to boost their immunity. This drug has already been shown to be very safe for short term treatment in humans (2 tablets per day for 4 days) and GSK have consented to let us use it. Basically, we will these the ability of white cells from old volunteers to perform immune related functions both before and after taking this compound, known as Losmapimod. We will test the ability of the drug to enhance a skin response (analogous to the BCG response) in older volunteers. We will also isolate the white cells from a blood sample of these volunteers and test whether the pretreatment with the drug improves their activity when tested in a test tube. I have received £3.2 Million form the Medical Research Council recently to perform these studies with a team of scientists and medical doctors.

If these studies are successful, it may be possible to enhance vaccine responses, that are defective in older individuals, by short-term pretreatment with this or related drugs. Also it may be possible to use this strategy to make current therapy against cancer more efficient. My research group is actively engaged in testing these possibilities. This is not a treatment that can be used widely at present, the studies have to be performed and analysed in the first instance. Even if this drug works in boosting immunity, it may not make you live longer but it will potentially reduce some of the suffering that occurs as a result of decreased immunity during an older age. Nevertheless research such as this does lend some hope to the ageing public that researchers are taking the challenge of boosting immunity during ageing very seriously.