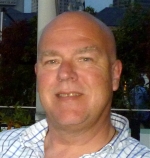 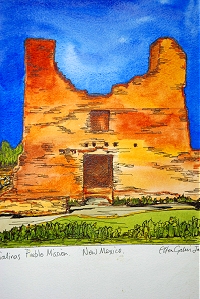 There’s no doubt that initially, and for a long while afterwards, our experience of America was East Coast based. We lived in Rockville, Maryland for a year while on exchange as a teacher.

Our weekend jaunts were into DC., to snow bound cabins in West Virginia, trips to Annapolis and Chesapeake Bay and our first out-of-state trip was to the North East, starting in New York along, for us, the legendary New Jersey turnpike. We’d come to look for America but only as far as it was located in this North East quadrant. So it was for pretty much the whole year until our cross country trip to the West coast at the end of the year. Subsequent visits in the next few years were confined to the North East and a couple to the North West where I had relatives.

Our exchange year trip gave us our first brief experience of the South West but not, at this point, of New Mexico. In fact although we had an offer to stay with the sister of a work colleague in Albuquerque, we decided to head from the Grand Canyon straight to LA. The South West in summer was too hot for our British blood, we wanted to feel some ocean breezes on our face. So no New Mexico in 1979 for us, even though, in that year, we visited over 30 states , New Mexico was not one of them.

A few years later, New Mexico came to us, moved in next door in fact. Strange how things work out sometimes. The house next door, when we first moved in to our house, was owned by the, soon to become, Bishop of Durham but, as he was then away in Durham doing bishoply things, he rented his house out. In this year (about 1988, I think) he rented it to an American couple with two children. The male half of the couple was a pediatrician on sabbatical to Leeds University. 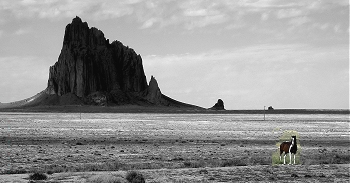 Truth be told we were not very neighbourly people and Stewart and Veronica had been living next door for about half their year before we spoke to each other. After that we got on like a house on fire as the saying has it.

Stewart and Veronica came from Albuquerque and, as we became friends – still are, – they invited us to stay with them in their wonderful adobe house and our affection for the South West began. It was, and is, very different from New York and New England but it impressed us.

As I suggested, in my last post on this site, my affection for the South West, New Mexico particularly, was boosted by my discovery of the marvellous Tony Hillerman introduced to me by Stewart. His novels were quite difficult to get hold of in the UK at that time, still are, worth the effort though. This, of course, is where the magical Shiprock (see images) enters my story as it figures in so many of his books about Navajo policemen Jim Chee and Joe Leaphorn.

On one of our subsequent visits to stay with Stewart and Veronica we made a trip to Shiprock the monolith, as opposed to the town itself, which was memorable in quite a different way. So for me the experience was a literary one, for my wife it was an artistic one. She loved the red earth and blue, cloudless skies (which she rediscovered when we lived in Australia), I loved the spiritual / Navajo connection. I’ve always enjoyed ghost stories and Hillerman’s stories often have a ‘ghostly’ subtext.

How do I Advertise for a Roommate?