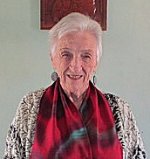 XArlene Brown Background:
The eldest of seven, I was born December 9, 1930 in Commodore Pennsylvania a small coal mining community. I am the mother of five, grandmother of 17 and Great Gram of 14. The majority of my life was spent as a housewife & mother, nurse, substitute teacher and finally as a group leader in a local electronics plant. I was a very ordinary person doing ordinary things.

From the beginning I was in training for the life I would lead after I retired from the work force. A life dedicated to serving needy, abused and abandoned children in Rwanda, Africa.

I grew up in a time when electricity, flush toilets, running water, unpaved roads, phones, television and computers were not common. I knew how to live without these things and so the move to Rwanda was not such a hardship as it would be for youngsters today.

At age 65 I traveled to Zaire, Africa currently the Democratic Republic of Congo, and spent three months working in refugee camps around the town of Goma. Children are the victims in any conflict. Seeing the plight of the Rwandan children in Zaire I was determined to return some day to make a difference in their lives.
I returned to the luxury that is America.

In 2006 after several trips to Rwanda I sold my home, car & all my possessions and made the move to Rwanda to spend the rest of my life. My heart for orphans, and the most vulnerable children made this move necessary.

Urukundo Foundation & Hope Made Real is the product of many who joined me in this mission to give hope to both the children and adults in Rwanda and to make their future brighter.

So much for my big plan.

To start I rented a house for the girls and I to live in. Being known as Urukundo Home for Children meant we needed to have boys in our home too.

We needed a house to be a home for young boys. That house was found and rented on the same road as the house for girls and across the road from the house for boys we rented a guesthouse. It was 2007 and we were paying rent for three houses.

By this time our population had increased so much that I felt hemmed in by children and needed some breathing space so we rented another little house on the same road for me to live in. It seemed strange at first to be in a house with no children but that didn’t last long. Seems as though each child found a reason to come across the road to talk to Mama. The only time I was alone was when I decided it was time for me to sleep. The children would coax to sleep with me but I stood firm. No children in my bed. They would go home in tears and I would go to bed with a guilty feeling. Loved those kids but needed my sleep more.

Becoming a property owner crept up on me when I least expected it and for a rather dumb reason. When we rented the house for boys there were chickens that came along with the deal. Now believe me chickens were the last animals I wanted in my life. Sounds ridiculous but from early childhood I have been afraid of chickens. Only a person with a like phobia would understand such a silly thing. The chickens were there and I needed them out of there. I was not happy having chickens doing their business where our boys played. Scraping chicken dirt from shoes of little boys is a stinking job and I mean that literally. I bought the first piece of land to have a place to move the chickens. Yep, that was my reason for buying land .

In January 2008 we broke ground for the Boy’s House and by December that year not only was the boys house finished but we had built a house for the girls. We were all together in one place. . Urukundo Village grew from that first piece of land and those first two buildings to what it is today. It now consists of about 10 or more acres on a mountain in the Center of Rwanda where 54 kids have a home and a staff of 52 make a living. I wear many hats and am proudest of all to be the mama.

As I write this so much has changed in my world. I am now director of an on going Foundation. This coal miner’s daughter has done well but life for me began a new chapter after age 65. To tell it all would take a book. Hey, that’s a thought. May be I should write a book. Who would read such a book and believe so much can happen after retirement.