Please check out our Guadeloupe blog. 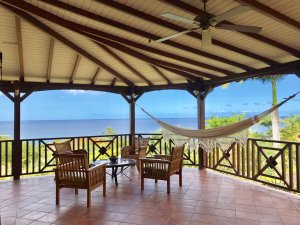 Guadeloupe is an overseas region of France located in the Lesser Antilles of the Caribbean…not to be confused with Guadalupe island off of the west coast of Mexico’s Baja California Peninsula. With a population of over 400,000, Guadeloupe is the largest E.U. territory in North America. An archipelago consisting of two larger islands, Basse-Terre and Grande-Terre, with smaller surrounding islands (including, Îles des Saintes, Marie-Galante and La Désirade), it is diverse enough to keep anyone’s island fever at bay. Whether your interest is to relax on an unpretentious sandy, palm-lined beach and experience the culinary pleasures of the island’s renowned French-créole cuisine, or zip line through the tree tops of a tropical forest and scuba dive with turtles at Jacques Cousteau’s underwater reserve, Guadeloupe has a wide variety of activities for any age and inclination. We ended up in Deshaies, on the larger western island of Basse-Terre, where the BBC show, Death in Paradise, films its award winning crime-comedy series each year during the months of April through September. With non-stop flights to Guadeloupe’s Pôle Caraïbes airport in Pointe-à-Pitre (PTP) from a number of east coast cities (including, BOS, BWI, JFK, PVD and FL) on Norwegian Air and a weekly non-stop flight from Miami to PTP on American Airlines, it has been a breeze to get back to the states to visit family and friends.

The official language, of course, is French. We are, after all, in France. But, Guadeloupean créole is also widely spoken (and is even taught at school). While there is English spoken in the main tourist areas and in many restaurants, a working knowledge of French is highly recommended if you are looking to retire here. 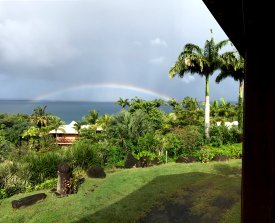 SIM cards are relatively inexpensive. A monthly subscription costing about 25 Euro per phone gets us all we need in terms of minutes and data through Orange Caraibe. Internet, on the other hand, is more of a challenge. Only certain areas have fiber optic cabling, so we struggle with DSL lines that slow to a veritable drip during peak usage periods. But, in the end, we are able to send and receive e-mails, surf the net, FaceTime friends and family, and call the U.S. for pennies with our monthly Skype calling subscription. Through Skype, we call anywhere through the Skype app on our Guadalupe cell phones and our U.S. number appears on the recipient’s caller I.D. It’s pure genius.

We qualified for a long stay visa. France offers long stay 12 month renewable visas for those who will not work in Guadeloupe and can meet other requirements (including showing that you have enough money to support yourself during your stay, lodging and a global health insurance policy). 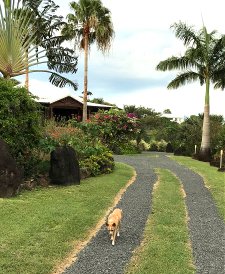 Foreigners can purchase and own real estate in Guadeloupe. While there are some issues that differ from U.S. real property transactions, including the fact that the transaction must be consummated through a notaire (similar to an attorney), various waiting and rescission periods must be recognized and the government needs to decline to exercise its right of first refusal before being able to close, the process is relatively painless. We were even able to secure a loan for a portion of the purchase price through French bank. Real estate prices seem lower than on other islands and the homes have character and charm.

We decided to ship a 20 foot container from the U.S. In hindsight, we would have shipped a 40 foot container and loaded it with more furniture. It took a few months, but everything arrived in perfect condition and dealing with customs on the Guadalupe side was great. No taxes were charged on our household items as we were relocating.

Our dog made the journey with us. He had to be microchipped and also had to receive a health certificate on an official form, but he made it over without incident. We have also since adopted a homeless kitten who wandered onto our property. 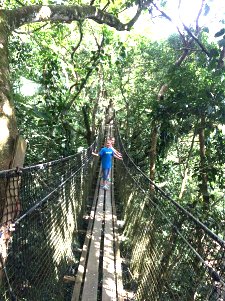 We registered our daughter in the middle school in Deshaies and she loves it. Her classmates were welcoming and kind, allowing her to assimilate and adjust with ease. She attended a French school in the U.S. and is already at the top of her class here.

We have a global insurance policy for our family. The annual premium is less than the premium we were paying for U.S. health insurance for one month. Seeing a doctor here is also quite affordable. A check up for our daughter was 25 euros.