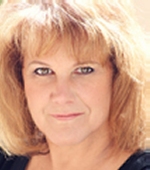 XKaren Chandler Background:
Karen retired from teaching theatre in Northern Nevada after 25 years and moved to South Florida. With a BA in Studio Art from the University of Nevada, Reno and a MA in theatre from Roosevelt University, Chicago, Karen is currently involved with local theatre projects, both professionally acting as well as teaching children's theatre. She also is reinvesting in her art roots and has recently been accepted to several shows in 2D painting and wearable art. She and husband John love all things "beach" and are readying to move to surf blessed Costa Rica in the near future.

You can find Karen on her Facebook page and also reach her by email.

Baby Boomer Women: Who didn’t jump on their bed along with Sandra Dee and practice the stance that would let them ride the wild waves alongside Moondoggie and the Big Kahuna? Hooked, we also faithfully watched the string of low budget Beach Blanket surfer boys and girls in other movies as well as tuning into the weekly antics of our favorite surfer girl on a Gidget TV series starring the teenage Sally Field, right? We really, really liked her! 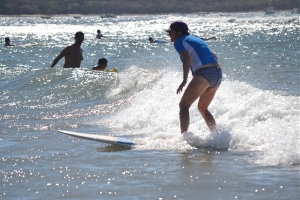 I was born and raised in the perfect place for living the Gidget Dream- a “Wonder Years” suburban block of 3 BR/1BA homes in the California South Bay of the Torrance Beach area during the height of the original surf boom. My two older brothers got their waterlogged boards that were twice their height when they were just 10 and 11 years old respectively. We melted candles in the garage to provide surf wax traction and loaded them into the old station wagon with the back open to accommodate their tremendous length. The boys surfed the Redondo breakwater along with surf legends Mike Doyle and Dewey Weber. I watched from the shore, waiting to get old enough, brave enough and secure enough to test the surf waters myself.

I was already a really good body surfer. The “Moms” of the neighborhood would loyally load up the station wagons (ours was always AMC-Dad being true, blue, American through and through) almost every summer day with as many kids as could be crammed in, minus seat belt laws in those days. Coolers of Kool Aid and wax paper wrapped peanut butter and jelly sandwiches with real sand always included would punish us after consumption as the obligatory “30 minute wait” dragged on timed by a Timex wrist watch. By the time I was 12, I could read a wave as well as any guy on the beach and scoffed at jellyfish stings and sunburned skin.

But the surf waters were not so friendly for girls in those days and they were more likely to be found on the sand working on their tan. Besides we had no resources. There weren’t surf schools and no self-respecting surfer would teach his girlfriend to surf for fear of being labeled “pussy whipped”. My own insecure “Father Knows Best” mentality bought into reality the fear of being rejected, so I pushed the surf dreams aside to be accepted by my peers, especially the boys.

Fast-forward 30+ years. I’d traded my surf dreams in the 70’s for snow skis and became a good downhill skier living in the Northern Nevada/ Tahoe area. Kids, college, career (in that order) flew the years by. 10 years ago while taking high school students to a vocal competition in Hawaii, I agreed to take 3 students to a surf lesson and joined in with them. Wow! The new lightweight foam boards were so easy to stand up on. And all along Honolulu beach women were surfing and taking lessons. I had a blast, along with the 3 boys. “I’m going to do this more!” I thought. 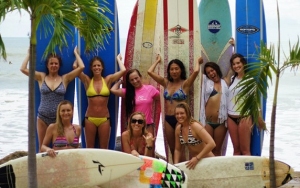 But life intervened again with an ugly divorce- both emotionally and financially- followed by the death of a beloved friend by suicide. Instead of breaking me though, the tragedies created a new, brave me. My old fears and insecurities were swept away along with the foreclosed home, and 3 years ago, at age 54, I went on a journey of self-discovery. Off to Chicago to visit my daughter and see friends from my college days there, and then- a woman only surf camp in Nicaragua. I was really going to learn to surf.

Why Nicaragua? Well my beloved friend had served there in a volunteer program and I wanted some reconnection through location. This camp was advertised as not being all posh and spa – it was a true adventure camp including drill sergeant like women instructors who wouldn’t take “sissy” for an excuse. That was for me. Without the spa treatments and cushy single rooms, it was affordable and the fact that it was a machine gun toting, bandito filled country just amped the daredevil in me.

The Last Gin and Tonic