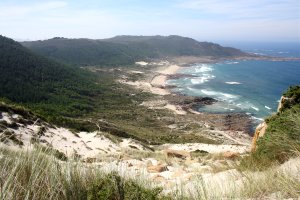 When people think of Spain, what generally pops into their minds is a stereotype. Bulls, flamenco dancers, sangría, and possibly, paella dance through their heads. Images of sunny beaches, olive groves, and white-painted houses clustered together on a dusty plain soon follow. Much of this stereotype dates back to Ernest Hemingway, and Franco’s intention to milk his and other celebrities’ love of some of the things that most distinguish Spain from the rest of Europe.

But there’s another Spain. It lies in the north. It’s called Green Spain, and stretches from the Pyrenee foothills to the wild Atlantic coast of the Costa da Morte in Galicia. Of this, Galicia, in the northwest, is possibly the greenest. With the exception of the summer time interior of the province of Ourense, the rest of the region is completely green and soothing. Here, flamenco is unheard of. Regional music is played with the Celtic bagpipes. Bulls are still killed in the arenas, but only a few individuals are strong followers; the rest of the population is not enticed by the torero’s skills in avoiding a goring. Sangría is replaced with real wine, some grown on slopes first planted by the Romans. Paella is an imported dish; our plates are generally filled with caldo Gallego, an enormous production of potatoes, leafy greens, salt pork, chourizos, and chicken, especially during the wet and cold winter.

Galicia has long been isolated from the rest of Spain by geography. The Ancares, Courel, and Invernadoiro mountains in the east, along with the river Eo, made travel to and from the central plains and the rest of the north coast difficult. Portugal, to the south, was on the other side of the river Miño for several kilometers, and then the Xurés mountains made transit difficult. Until the nineteenth century, and the first railroads that finally connected us with the central meseta, Galicia looked toward the ocean. Fishing villages became fishing towns, and then seaport cities, such as A Coruña, Vigo, or Baiona. The last was the first city to hear of the discovery of the New World when Columbus returned. There is a replica of one of his caravels anchored there. The estuary of Vigo was the scene of various pitched sea battles, one of them involving Sir Francis Drake. It was also the inspiration for Jules Verne’s 20,000 Leagues Under the Sea, thanks to two visits that made Verne fall in love with the city.

Galicia is no longer as isolated. There are excellent roads now. One comes along the northern coast, straight from Irún, on the French border. Others come from the meseta, and Madrid. Then there are smaller roads that still maintain treacherous curves along frowning hills. The train first built at the end of the nineteenth century still connects with Madrid along much of the same track. It has been modernized in sections, but it won’t be all high speed until some years from now. There is also a track that goes to Barcelona, but the trip takes around twelve hours. There are excellent connections south by road, to Portugal; the train is not very modern. Modern transport has also appeared in the form of three airports. One is in A Coruña, another in Vigo, and the most important one is in Santiago de Compostela, which is also the regional capital.

Most modern-day visitors to Galicia tend to visit Santiago de Compostela. It is at the end of the Way of Santiago, that begins in Roncesvalles and ends at the cathedral of Saint James the Greater. Pilgrims from all over the world walk the Way, or a part of it, to reach the romanesque cathedral. Over the years, its romanesque façade was covered with a baroque façade, which is the one it now presents to the Praza de Obradoiro, the front door, so to speak. Other sections include Gothic touches. Each of the cathedral’s four sides sits on an open plaza. 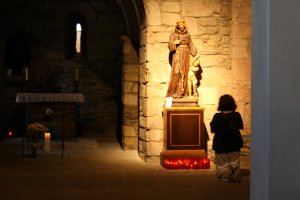 The reason for the cathedral and the pilgrims is the belief that the Apostle Saint James the Greater is buried in its crypt. Legend goes that when the Apostle died in the Holy Land, his body was secretly transported to Galicia, where he had proselytized. To top off the miracle, his body was transported in a stone boat, that then tied up at a dock in Padrón, fifteen kilometers to the south, on the river Sar, before facing the final leg of the trip overland to be secretly buried. His tomb was discovered by a hermit named Pelayo, who saw mysterious lights in a clearing. From then, a church was set up on the site, and construction of a cathedral commenced around the year 800.

The truth of the matter? That the name “Compostela” doesn’t mean “field of stars” but, rather, “field of steles,” a funerary marker. The area of the Praza do Obradoiro was an ancient necropolis, and it is conjectured that the tomb of Santiago was originally the tomb of a rich Roman. Still, the legend remains, and enough believe it to make the pilgrimage and receive an indulgence from the Church.

Pilgrims with back packs and walking sticks abound in the old city. But Santiago is also a university town. During most of the year there are young people walking around, some carrying clipboards or notebooks with the USC (Universidade de Santiago de Compostela) logo. They make it a lively city, and on Thursday nights the trendy bars in the old section of town, and the new, are jumping with youth and music.