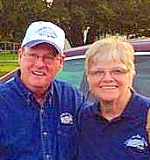 XKathy and John Huggins Background:
Kathy and I are really just plain folks like you, but we live in a thirty nine foot RV instead of a house. Maybe we lost our minds a bit; but we’re happy we did. I am retired from the US Navy as well as a retired manufacturing Quality Manager. Kathy has worked extensively in the medical administrative field. We had travelled worldwide due to my naval service as well as locations on both coasts of our beautiful country. We would see the big bus conversions and Winnebago RV’s on the interstates and we both said, “one day that will be us”. We started dreaming in earnest in 2003, a year before my job was out sourced. We went to shows and visited dealerships just to see if we could really do this. We could. We took the plunge two years later after we sold our house in Florida and bought “The Dream Machine”, our 2004 Fleetwood Expedition diesel motor home. Since then we have travelled through the states we used to fly over and discovered a unique and awesomely beautiful land that pictures do not give justice to.

We have been volunteers, workampers, podcasters, and now authors. Our Podcast, or internet radio show is titled Living the RV Dream and we discuss everything about the RV lifestyle. Check it out on iTunes in the podcast section or on our website. Our blog is also available on our website on the Podcast and blog page.

Please check out our very extensive website with much information about every kind of RVing.

And you can reach us by email. 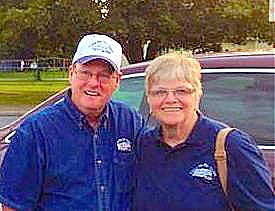 My wife and I had a casual acquaintance with camping when we got married. She had camped in tents with her family growing up. I had done a lot of camping as a Boy Scout leader while our boys were growing up. We both enjoyed the outdoors and traveling to new places, but we had fallen away from camping.

Fast forward 35 years into our marriage. Kathy had been asking me about camping. “Let’s go camping!” she would say. With regularity, my answer was no. Finally I agreed. We were going to Branson, MO for a conference, and we had several days to kill in advance of it. When I say yes, I really go all in. We bought a huge tent, coolers, camp stove, porta potty, and all the other things we thought we would need, including a king sized air mattress. Unfortunately, that thing didn’t have any baffles in it. If I would get up, her side of the bed would fall. When I got back in, the bed would rise like a trampoline. This went on all night. We didn’t get much sleep, but we laughed a lot.

Did I mention it was the hottest week they had had in many years? It wasn’t a disaster, but we decided that any other camping would have wheels under it and an air conditioner on top of it.

From that time on, we looked longingly at RV’s and when we would see a big motorhome out on the highway, we both would say in unison, “That will be us some day.” A few years later we attended a very large RV show in Tampa, FL . We had stopped by a booth staffed by members of the Escapees RV Club. We talked to the two couples there for over an hour all about RVing, full-time RVing, and so many other things that sounded so wonderful. After an hour, the skeptic in me just had to ask, “So, what’s the downside of this full-time RVing thing?” Almost in unison, they all said, “We should have done it 10 years sooner!”

That got us really thinking about our retirement and what we wanted to do. We started to research all kinds of RV’s and places to go, and we even talked to folks in campgrounds. I talked with RV service shop managers about which ones needed the least repairs. Remember the skeptic? We were at a point where we had about 2 more years to work and then retire. We sold our large home in a gated community because we only used 3 out of 7 rooms, and it was getting to be too much work to clean it, cut the grass, trim the bushes, and all the other stuff that goes with home ownership. We bought a nice town home and planned that last 2 years.

Ten days later, my job was downsized and outsourced. Nobody was lining up to hire a 58 year old either. It wasn’t but a few months later when we got an offer we couldn’t refuse on the town home. That evening, we were sitting at our dining table and it became pretty obvious; If we don’t buy that RV pretty soon, we’re going to be homeless.

As a U. S. Navy retiree, we had been all around the edges of our country at various Navy bases. Even though I travelled extensively in my subsequent civilian jobs, all I saw was hotel rooms and airports. We wanted to see the country we had only flown over or skirted around. We set a goal to see all the National parks.

Kathy wasn’t too happy with her job, so the decision was made. We would have our kids take everything they wanted, have a few yard sales, and donate whatever was left to the Salvation Army. We were going to become full-time RVers and live on the road! The only RV we had ever owned was a Volkswagen Camper Van years before. We were excited so we jumped right in! We bought a year old 40 foot diesel motorhome and after a couple of shakedown trips, we hit the road for South Dakota. Our Goal for that first year was to see Mt. Rushmore.

And see it we did! We were offered an opportunity to stay in a campground and for a few hours of work per week, we would get a great campsite and time to see all that the Black Hills of South Dakota had to offer. That was our introduction to workamping. In our 10 years on the road we have done 9 workamping jobs and a few volunteer gigs as well.

Retirement On The Edge

Retirement – An Opportunity to Balance the Facts of Life