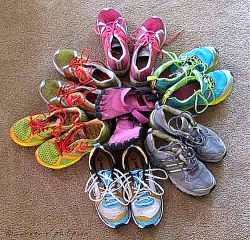 Jogging one breezy morning, I noticed a white plastic bag tumbling across the street. As I got closer, the breeze didn’t stop, but the bag did. I slowed for a better look until I realized the bag was a skunk, un-thrilled by my approach.

Was the skunk entirely white? I haven’t the foggiest. Rather than ask to examine its underside, I sprinted to the opposite side of the street to watch it waddle away. We’d lived in our home for years unaware that we had a skunk as a neighbor.

Imagine my surprise when, only a week later, I encountered a more conventionally garbed skunk (black & white) toward the other end of our street. Because I didn’t slow down to show proper respect when I observed a short, upright, something or other in the darkness, this was an encounter of the close-call kind. A-ha! I finally realized: that’s a standing tail. Although the skunk had already sprinkled a greeting, we said our goodbyes before my defensive new neighbor became too defensive.

Jogging so early, I would go days without encountering a moving vehicle. If there was one, it was normally the newspaper deliveryman. I would hear his car engine, see the one functioning headlight and know which side of the street to avoid. If he passed, his radio infused my stride with a pulsating Latin beat.

When my wife followed me into retirement, she decided she could no longer live away from her beloved Wisconsin family farm. We of course moved that day.

In Wisconsin, I had to modify my exercise routine by adding or substituting stationary bike rides. The initial cause was ice, snow, wind and way below 0 F temperatures. Later, well, once you’ve added something to your routine, why drop it? I’ve also had to don a reflective vest on the country roads. Though I seldom encounter a car or pickup, those that pass are in a hurry and not expecting a struggling jogger at 0-dark hundred.

Unlike my wildlife monitor status back east, whether because of hunting, the lack of contiguous cover or local wildlife neuroses or sleeping habits, I have not come upon a single creature in over a year of predawn outings. My afternoon walk tally is two–one raccoon and one rabbit, not counting birds and squirrels.

Do What You Can

With few vehicles and no animals to distract me, I have the opportunity to push my personal bests. Will I? Maybe, but let’s not get carried away. I never said I liked exercising. It’s just one of those things you have to do, regardless of age. I’ll keep it up as long as I can, and I hope you’ll do the same.

How to find your perfect roommate when sharing your home