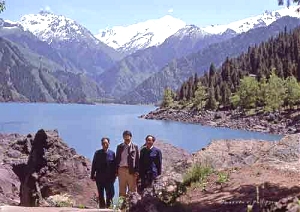 In 1982, a UN consulting project took me to the Tien Shan Mountains of northwestern China. When I returned to Cornell University, my colleague, Prof. Ta Liang, who had come to the U.S. from China after World War II, advised me that, because I’d seen Heavenly Lake, I would live forever.

Although I trusted Ta implicitly, as I got older, I decided to hedge my bet. Late in life, I started exercising and modifying my pizza- and calzone-centric diet.

Working in the Washington, D.C., area after leaving Cornell, I got in the habit of exercising before the sun even thought about rising. (If you jogged the way I do, you’d want it to be dark, too.) My 30-minute routine wasn’t much, but it encompassed a little of this, a little of that and a half-mile jog (at least there was a hill). In the evening, I might take a walk over the same half-mile.

Then I had back surgery, after which I had to stretch and strengthen every morning as instructed diligently by the physical therapist. (She laughed uncontrollably when I described my little of this, little of that routine.) I stopped jogging until the surgeon told me that I was in terrible shape and should be jogging. Who knew?

Eventually, I doubled the time I exercised and distance I jogged. After retiring from the federal government, my sometimes, evening constitutional became a daily one-mile walk, executed in the afternoon at a respectably brisk pace.

My predawn jogging was on our quarter-mile long street in the suburbs. There were streetlights at intersections and maybe half of the homeowners kept an outside light on all night. A few of those house lights had motion detectors, making me feel special as I passed by. One, in fact, was a variable intensity light. How cool! When I approached the house, the brightness of the light increased steadily–a radiant crescendo that peaked when I was in front of the driveway, holding the microphone, waving to the fans…thank you, thank you. As I continued off stage, the light faded, trying to hold me in its luminous grip. And since I passed back and forth in front of this house, I was featured twice! Every morning!

Exiting our house for my predawn venture could be interesting. One morning, easily a half dozen deer were attending a board meeting in front of our house. They adjourned when I offered a motion. Another morning, I interrupted two fox (four legged) on our front lawn, one sitting, the other stretched out comfortably. They were gazing at the street, discussing the weather or having a cigarette. Executing a proverbial double take when they heard me, they ended their conversation, extinguished their cigarettes and abruptly departed.

Even with a full moon and the house lights, our street was usually dark enough that I had to focus on the pavement. Still, I would occasionally spy a deer or fox racing across the street or a deer frozen on someone’s lawn. (Rabbits ran rampant day and night.)

How to find your perfect roommate when sharing your home