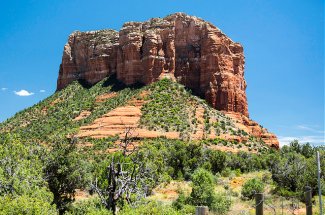 Have you ever gone to a place that leaves you speechless?

Have you ever seen something that makes you stop what you are doing and causes you to sit up and take notice?

Have you ever turned a corner and suddenly found yourself muttering “oh my God” under your breath?

The setting, the scenery, the landscape; all of it so stunningly beautiful that you forget for a moment who you are, or where you are . . . or even why you are. You are speechless.

There is such a place.

Two hours north of our snowbird home. Diana and I found it while on an exploratory road trip one year. We had heard about it and vaguely had an idea of what the place would be like. But we never thought we would be so spellbound by the backdrop of its raw grandeur.

The place is called Sedona, Arizona.

Sitting 115 miles north of Phoenix, a few miles off of Interstate 17 on the way to Flagstaff, Sedona is a resort town of about 10,000 residents. It’s a favorite vacation spot for folks from all over North America and beyond. Hikers, mountain bikers, nature lovers and spiritualists flock to Sedona every year to relax and unwind.

What keeps them coming back?

Red sandstone formations towering above the town and surrounding countryside.

Everywhere you turn you are met with these gorgeous shapes and patterns of deep red sandstone rock which illuminate profusely and glow various shades of orange depending on the light and angle of the sun. During sunrise and sunset many people can be seen at numerous viewpoints scattered throughout the area with cameras in hand or on tripods waiting for that one unforgettable picture of Sedona’s famous red rocks.

Over the years, many of these famous formations have even been given a name befitting a certain likeness or resemblance. As you enter the Sedona area from the east on State Highway 179 you are greeted by the red stately magnificence of Bell Rock and Courthouse Rock towering above the roadway as you pass by.

Shortly after entering Sedona’s city limits, you can make out the formation of Snoopy Rock, a red sandstone configuration resembling the Peanuts character Snoopy lying on its back on top of its doghouse, a bird perched on its nose. Cathedral Rock, which sits just south of the city is one of the most photographed landmarks in the state of Arizona. 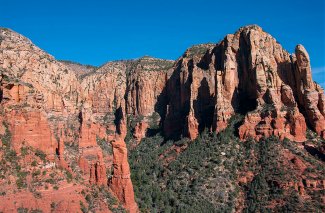 As far back as the 1920’s, Sedona’s magnificent red rocks made a perfect backdrop for many of Hollywood’s major productions. The wide open spaces and the picturesque landscape became home to more than sixty movies, many of them westerns featuring such actors as: John Wayne, Burt Lancaster, Robert Mitchum, James Stuart, Ray Milland and Barbara Stanwyck.

The stunning scenery surrounding Sedona which made for many spectacular outdoor scenes in Hollywood movies captivates all who come to this place. But one cannot help but wonder, as they gaze upon its beauty, how such magnificence came to be.

And why are the rocks so red?

Rust! Iron oxide is a powerful coloring agent. A very thin layer of it coats each grain of quartz sand in the sandstone formations around Sedona. Iron bearing minerals react with oxygen and water forming a very thin paint-like coating on the quartz and sand grains. In other words, during the 80 million years it was taking to erode the rock to their present form, dissolved iron oxide was staining the rocks of Sedona red.

Diana and I make a couple of trips to Sedona every snowbird season and stay a night or two. Thirty minute helicopter tours are available from the local airport and jeep tours lasting anywhere from one hour to three hours are also offered by local tourist companies.

The red rocks of Sedona have become a magnet to us. We will always come back again and again as long as we’re coming to Arizona for the winter. It is a place of unparalleled natural beauty. The attraction of the red rock formations have an almost mystical quality about them making Sedona a unique and extraordinary place.

A must see on your retirement travel wish list!

Prehab: We’re Going to Need It