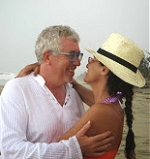 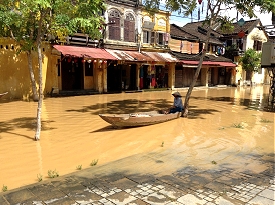 We are confident we can balance our respective priorities and arrive at a new home town that blends our more fundamental requirements as a couple.

So how are we doing so far?

In Viet Nam, our first stop on our Southeast Asian trek, we started by Hanoi, which was quickly discarded. The food was amazing, access to yoga was adequate. The architecture and general buzz of the town was a big plus, as was our initial interactions with locals. Within a few weeks in Hanoi, we got a sense of what our lives might start to look like, should we settle in Hanoi. But it wasn’t to be. Why? My desire for green could easily be accommodated by the numerous parks around the city. However, the level of pollution was such that both of us got pretty sick from the ambient pollution. Never thought a city could have so much pollution that it would actually make us sick, but it did. So Hanoi is out.

What Hanoi did not have, Hoi An, in Central Viet Nam has in spades. The quality of the air, is superb as the town is nestled in a large green belt of rice paddies on one side, and gorgeous beaches on the other. We fell in love with Hoi An. The architecture, where meticulously restored 17th Century French mansions intersperse with gorgeous Chinese temples and 18th Century wooden trading houses, is a reason to move there in and of itself. The markets explode with the freshest produce and fish we have seen anywhere in Asia so far. The culinary culture is extremely developed, with a particular strong point in favor of street food. We loved it so that we had a hard time “moving on”. 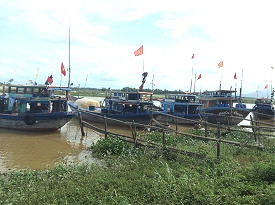 In all, we spent 5 months in Hoi An. During that period, we can count how many times we ate at a restaurant on one hand. Hoi An is all about its amazing street food. My organic food criterion was met as we lived on the largest organic herbs farm in the country. So what were the drawbacks? the potential to develop a source of income was not readily obvious, but it is too early to dismiss the town based on that criterion. On my side of the equation, Yoga was available, but only in a limited fashion. Hoi An is definitely a top contender.

While in Viet Nam, we took a 2-week trip to Cambodia. Many travellers just rave about Phnom Penh. It was “nice”, interesting architecture and perhaps there could be fertile ground to develop a business activity with an impact dimension given Cambodia’s large needs. But we nixed Phnom Penh. For us, it felt as though Cambodia was “too similar” to Nicaragua. The general feeling was the same, with the exception that Cambodia has land mines. So Phnom Penh is out of the running.

We then went to Indonesia, where we sampled two very different ecosystems. On one hand Yogyakarta, a dynamic, buzzing and artistic city. There is something very appealing about Yogyakarta, but the overall size of the city is a bit off putting. Ultimately, we nixed Yogyakarta as the food source is very meat-heavy, not a good draw to my mostly vegetarian diet. 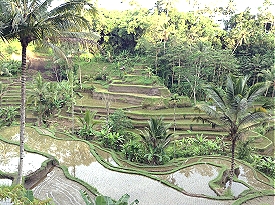 Ubud, Bali was a big, welcome surprise. Just as some travelers have a knee jerk reaction to Hoi An as being “too touristy” – something we discovered after 3 days was entirely incorrect, as tourists tend to keep themselves to a very narrow corridor of a few streets, so it was with Ubud. We also fell in love with Ubud.

The main draws were three, and fairly Peta-centric. First and foremost, there was the most extensive yoga community we have seen anywhere. If there is a yoga heaven, Ubud is it. As a result of the yogi/yogini draw, a culinary culture has emerged that is vegetarian and raw/vegan friendly and plentiful. The architecture is nothing short of magnificent, with dramatic “compounds” of homes that look like temples, so ornate they are.