Eclipsed by the Eclipse 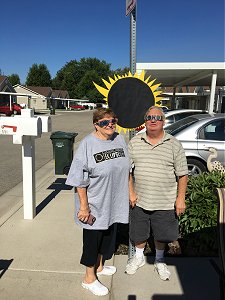 One of the advantages of being retired is that whenever a noteworthy event comes along during normal working hours, i.e. an inauguration speech, a MLB playoff game, or (ta da) an eclipse, we seniors are generally free to watch it at our leisure.

Such was the case this week at our little fifty-five and over retirement condo community here in Boise, Idaho, just a few miles from the path where one could view the eclipse in its totality.

Generally Diana and I have very few excuses to have a party. So an eclipse party seemed like a natural. Beginning around ten in the morning, lasting for a couple of hours and being outdoors on a nice sunny day, (well, for the most part sunny), all seemed like a good recipe for a fun neighborhood get-together.

Diana ran it by our neighbor Sandy, a usually equally enthusiastic party strategist – and the race was on. Shopping lists were made, doors were knocked on and neighbors were invited. By the day before the big event had rolled around, our kitchen was piled high with packages of donut holes, glazed cinnamon rolls, little sausages, potato chips and crackers. Our fridge was crammed with all kinds of dips and juice with plenty of coffee, creamer and Splenda on hand.

I had never witnessed an actual eclipse before, but whatever entertainment the sun and moon had in mind for us, we were ready. We were determined to have a great party with our neighbors and friends.

The morning began with me setting up tables and chairs out in front of our house while Diana and neighbor Sandy prepared the goodies. By a little before ten o’clock we were all prepared with a fabulous spread on a table under our carport and guests started arriving to watch the sun and moon do their thing.

I’ve come to really enjoy get-togethers like this over the last couple of years since we became full time retirees. The connection with people and being able to share experiences has taken on a new meaning in the wake of retirement. There would be nothing worse I could think of than to grow old cooped up inside your house and never have a desire to get to know any of your neighbors or make new friends. So I was really looking forward to our Monday morning party and considered the solar eclipse as an afterthought.

We were all enjoying our coffee and donuts and having a good time with laughter and conversation when someone said matter-of-factly, “Look its starting.”

We all put our plates down and donned out protective eclipse glasses and looked up at the sun. Sure enough, there was the tiniest little bite taken out of the perfectly round orange sun at the one o’clock position.

We all went back to our partying and munching. We continued our conversations, occasionally glancing up with our eclipse glasses to check on the progress of the moon’s trek across the sun.

At one point I went inside and saw on TV that totality had been reached in Salem, Oregon and Madras, Oregon and was headed this way.

Boise was outside of the band of a total solar eclipse. I had read though that in our location we were going to experience 99.6 percent totality. Not bad, I had thought. Little towns just fifty miles north of us were bracing for huge crowds and were expecting traffic jams and packed hotels. I wondered if that was indeed happening.

Back outside, the gathering had taken on a more subdued tone as most of the party goers had abandoned the refreshment table and were standing out in the street with eclipse glasses firmly in place and all faces rotated upward. The moon had crossed about halfway across the sun and the bright orange orb looked like a crescent moon from behind our dark eclipse glasses.

“Looks like what’s outside on the door of an outhouse.” Someone glibly remarked. To which the gathering gave a hearty laugh.

I glanced over at the now neglected table filled with all the goodies that had been prepared. The eating and conversation had abated for the most part as we all stood transfixed in the middle of the street and watched the rest of the eclipse unfold above us. The air and sky started to take on the look of twilight and we noticed that the little finches and sparrows stopped flying from tree to tree as they always seemed to do and stayed perched in one place.

We continued to watch the show from behind our dark glasses as the moon finally moved in front of the sun with only a tiny sliver of orange light peeking out from the four and five o’clock position on the now blackened sun. We could feel the temperature had dropped very noticeable and the motion detector light above our front door suddenly came on, shining brightly through the darkened neighborhood.
It was otherworldly!

Does Your Retirement Future Include Road Trips…in an RV Perhaps?