One of our frequent flyer programs was about to change and become very costly. We decided to cash in some miles, and take a trip to South America. 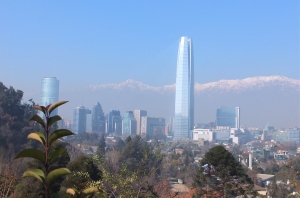 Originally, we wanted to visit Columbia, but the current State Department Safety Warnings were enough to try someplace else. On our bucket list was Uruguay, but for some reason Chile was not. A Google search of Chile peaked our interest and determined our itinerary. This time of year is their winter, which required packing warm clothes for the states and cold for South America. So it was off to Chile and Uruguay for a total of 10 days.

We left Atlanta on the evening of June 26th and after an unexpected stop over in Mendoza, Argentina (Could not land in Santiago because of the fog), arrived the afternoon of the 27th.

Having to fly round trip over the Andes took a negative situation and turned it into a fun experience, not to mention the benefits from an apologetic airline.

Chile is currently experiencing modest growth and as a result there is a very strong middleclass. The country relies on minerals for a good portion of their GDP, specifically copper. They have a strong market driven economy with small businesses as their backbone.

Before the trip we searched several expat blogs and were warned not to exchange too many dollars at the airport. We followed their advice and when we arrived downtown the bank exchange rate was 15% better. Most places accept U.S. dollars and so there is no need to carry large sums of Pesos.

We rented a furnished apartment for 5 nights in Providencia Santiago for $365. Santiago is a metro area of almost 7 million people nestled in a valley surrounded by high Mountains. I was told they have the purest water in South America because of the flow from glaciers high up in the Andes. 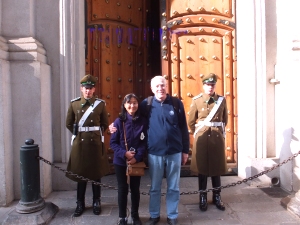 On our first day we toured Providencia on foot. Chile was playing in the world cup and in most of the neighborhood homes you could hear the fans cheering on their team. We walked to an overlook for a panoramic view of the city. Later we ended up at Gran Torre, the tallest building in South America at 300 meters (984 feet) and the adjacent building the Costanera center mall, also the largest in South America. Enjoyed a very good Salmon lunch in one of the top floor restaurants.

Providencia is a recommended area of Santiago for expats, as it is very safe and clean. There are many restaurants, parks, shopping centers, and the people are very friendly. We had to ask directions several times and they actually walked us to our destinations.

On several of the main streets there are vendors selling all types of products made in Chile. Miwa purchased a nice neck warmer for under $5.

On Sunday we obtained BIP cards for $1.5 plus $3 travel and experienced the Santiago Subway System. Living in Japan with the undisputed world’s best rail system we did not know what to expect. First off to ride the entire system including the downtown buses was only 660 pesos or $1.19. In Japan our cost to travel two stops away from Yokohama station is $1.60. Our second surprise was the beautiful artwork on the walls of the station platform. The train showed up on time, was modern, clean and comfortable. The only major difference is that when riding the trains in Japan hardly anyone talks. In Santiago it was the exact opposite everyone participated in enthusiastic conversations.

At the last station we had to catch a bus but could not find the bus stop. We stopped a police officer, he called the bus company, and waited with us until the correct one arrived. He even looked up Spanish to Japanese translations on his cell phone to more effectively communicate with Miwa. 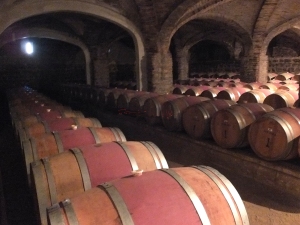 Our final stop was to the Santa Rita Vineyard for a scheduled tour. This place has a great free museum and their history is part of the successful revolution for Chile’s independence, not to mention the excellent wine tasting at the end of the tour.

On Monday a tour bus picked us up at the apartment for a trip to the Pacific coast, Vina del Mar and Valparaiso.