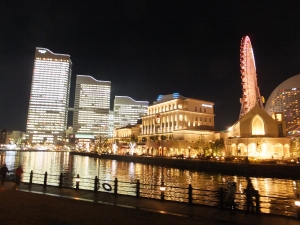 No Japan is not a Christian country, however, you would not know that during the holiday season. Everywhere you go there is wonderful Christmas music playing in the stores, and colorful decorations everywhere.

Only 1 percent of the population is Christian. Way back in the 1500’s there was a large Christian population in Nagasaki and it was spreading rapidly. When Shogunate Hideyoshi took over the area, he destroyed almost all remnants of Christianity (including the deaths of 150,000 people). He ordered those remaining to renounce Christianity and many went underground to practice their faith secretly.

It was not until the Meiji period that this faith was allowed a foothold and today missionaries say it is still one of the hardest countries to evangelize.

An interesting fact is that there have been 8 Christian Prime Ministers, with the most recent being Yukio Hatoyama.

Japan does not consider itself a religious country, even with the majority being Buddhist or Shinto, although over the years they have picked up religious traditions from all over the world. More than anything this is a very disciplined tolerant society and they enjoy attending various religious ceremonies. The Western style church wedding has become very popular here.

Once you study a little of the history it is easy to understand why they enjoy celebrating the various religious holidays. 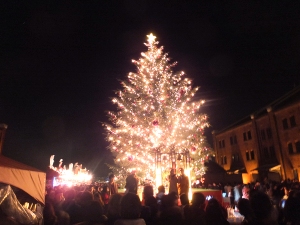 Christmas lights have become a tradition starting as early as the first week of December. This was my second year in Japan and I was missing some of the celebrations from back home in New Jersey.

After a little research I found everything From Georgia fruitcake to Kentucky bourbon eggnog it was all here, even a Honey Baked Ham. The sweets in the stores were decorated with colorful holiday designs. Santa Clause was everywhere. In Tokyo they had a Santa outfit contest, which drew hundreds of contestants. Many Japanese have turned to KFC for their Christmas dinner.

On December 23rd we walked to our local mall and there was a choir all dressed in robes singing Christmas carols. I recorded several so my friends back in the states could hear the songs in Japanese. It brought back fond memories of singing carols in our neighborhood as a child.

On the 24th we visited the bay area and several of the businesses turned on their lights for a spectacular view of the city. At the World Porters shopping center they showcased very creative luminaries. The chill in the air made for a festive experience. There were groups singing, vendors selling hot food and drinks. Over at the historic Red Brick Warehouse shopping center they celebrated with a German village atmosphere. A party boat was filled with spectators cruising along the harbor. There were thousands of people out walking to view the colors and taste the variations of food from the vendors.

Another long time tradition in Japan is to purchase a Christmas cake to eat in celebration of that day. The one we purchased was very tasty.

We kept a small tree with lights in the window that was visible from out local train station. Our son stayed the night and we opened presents by the tree in the morning. Using the latest in technology we were face to face with our family in the states.

As the New Year approaches Japan has many other celebrations. The Osechi Ryori (Traditional Japanese New Year meal). It has been served for thousands of years and each item, ingredient, and color has a symbol or spiritual connotation. Many stores sell out months in advance from the preorders. 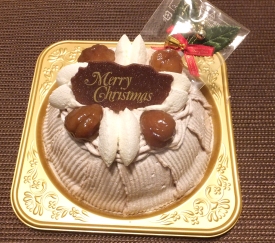 Oshogatsu is Japan’s biggest holiday with many people heading to their hometowns to be with family, attend the local shrines just after midnight and pray for a new year of good luck and happiness. At midnight the temples and shrines ring their bells 108 times to overcome man’s temptation. New Year’s day the children are handed colorful envelopes containing money, how much will be determined by their age.

This tradition is called Otoshidama.

Like the Christmas card, the Japanese send out a post card that is guaranteed to arrive on January first, the busiest day for the post office. Unless there was a death in the family during the year almost everyone sends these cards to family and friends.

The 2014 Christmas holiday season in Japan was a great and fun experience that I hope to have over and over again in the future.

Marking Time: The End of an Era