Not long ago my wife and I decided to launch our retirement with a road trip to Yellowstone National Park. We arrived at the park in September; the weather was warm and clear but the leaves were already tipped with gold with the promise of fall in the air.

Aside from the marvelous scenery and remarkable geothermal activity, such as Old Faithful, it’s the animals most tourists want to see. I remember stopping on a road because fellow tourists were leaping out of their cars to ogle a grizzly bear. People were actually running across a meadow to snap close-ups of the bear. Common sense, and quite a few episodes of Animal Planet, convinced me this wasn’t a good idea. After all, these animals weren’t tame.

During our trip to Yellowstone we spotted elk and moose, but buffalo were the most fascinating. The only buffalo I’d seen up close were on nickels. In Yellowstone there were lots of them, not as many as back in the day when millions of stampeding buffalo shook the Great Plains, but enough for reassurance that we hadn’t hunted these magnificent animals into extinction.

On several occasions I pulled over to watch the enormous shaggy beasts, creatures that looked like they should have been ridden by sand creatures in Star Wars. They stared at us from a distance, seemingly bored by our attention as they chewed withered shoots. 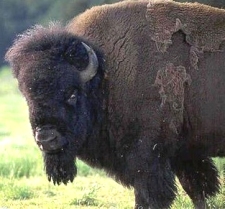 When we’d seen enough we headed for a park exit. The road was winding and I was driving slowly, a good thing because around the next bend was a herd of thirty buffalo ambling down the center of the road, coming straight toward us. Leading the herd was a massive old bull, bigger than any of the other buffalo we’d seen. I hit the brakes, hard.

A car was practically glued to our rear bumper preventing me from backing up. I thought about inching forward but what if I startled the buffalo? He might charge us. I was painfully aware of the fact that we were on a collision course with a wild animal the size of a Sherman tank. I considered telling my wife to get out of the car and run, but I was momentarily paralyzed by indecision. In the end I decided that the best thing to do was stay in the car, which is what we did.

The old bull looked like he was engaging us in a game of chicken, one in which we would surely lose. I held my breath, and just when he was about to plow into us he swerved to the left, the sound of his hooves clattering on the road.

He paused beside our car, which seemed to offer about as much protection as a plastic lunch box, and stared at me for a moment, his eye as big as a T-Rex’s. At the moment, that old bull could have had his way with us; his menacing horns were as long as my arm and could have opened our car like a can opener, but he just licked my window with his colossal tongue and continued on his way, his harem close behind. Our windows were closed but the air inside our car was thick with their musk as they engulfed us. They passed so close to our car that later I’d need to readjust my side mirrors.

When they’d gone I was reminded of words I’d read in the brochure we were given when we entered the Park. Yellowstone wasn’t a zoo. These animals were wild, and we were visitors in their home.

The above photo shows what we actually saw, but this bottom one is what it looked like to me. 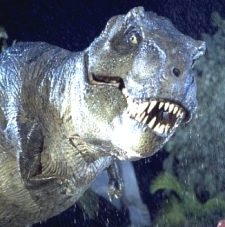