XSusan Klopfer Background:
Susan Klopfer is a writer living in Cuenca, Ecuador. Her newest book, The Plan, is set for publication at the end of September. The alternative historical fiction novel opens in New York City and moves to the Mississippi Delta before taking readers to Ecuador.

She offers a free audio book, Who Killed Emmett Till? through her website

Susan is also the publisher of the retirement blog, A Woman's Retirement Monologues.

You can also reach via email at

The loaf of German rye bread that I picked up from a specialty bakery—I could write about it forever! Dense, dark bread, high in fiber and strong in flavor it whispered “pick me up,” when we took time from our walk to shop in colonial Cuenca, Ecuador.

Should I tell you more? I could describe the colorful range-free

eggs we buy each week in the market—light brown to robin blue and even light olive in color. Once I brew a pot of green tea, toast the bread and fold the eggs into an omelet, I’ll savor breakfast with my husband of forty one years.

These are our retirement years, and I describe them as abundant.

We arrived in this colonial city last August, tired and maybe a little scared at the thought of retirement in a place so far from our New Mexico home. Seven suitcases, computer equipment, Ralph and Poppy—our dog and cat—were all that we’d brought with us on the 15-hour trip, with stops in Houston and Miami, before reaching the port city of Guayaquil.

Fred fell and wrecked his knee on the way to the Albuquerque airport, and I tripped on a block of cement, ruining my knee at 2 a.m., just as we arrived at our temporary apartment. This was Ecuador’s winter and it was colder than we’d expected, so we did the smart thing. We tended to our injuries as best as we could, then put on our warm pajamas and cuddled in bed under heavy covers for the first five days.

Our new landlord, an accommodating young man and used to expats arriving in a variety of conditions, helped us perform basic tasks. We used Cuenca’s cheap taxis to find a grocery store, restaurants, and eventually a doctor who cleaned up our injuries and prescribed medicine. The sun finally came out, the rain vanished, and we began to explore our new surroundings.

There are so many distinctive experiences that I could share on becoming an expat in South America—the colorful markets filled with fresh fruits and vegetables, the four rock-filled rivers that run through this city, its museums and symphony, to the nearby ruins and mountain villages in the Andes that surround us. Each contributes to our special retirement experience.

But what we’ve found most intriguing is the diversity of people we’ve met as we adapt to this culture. They come from throughout the world with their stories. I’d like to focus on our new bff—best friend forever.

We met Don Colón at Parque Calderon, the city’s central plaza. The small man with pepper gray hair and a distinct nose was hawking his new restaurant. Of course we stuck out as North American tourists with our clothing that was a little too bright and our faulty Spanish. He spoke to us in English while handing out a business card. “Please come by tonight and taste my good food,” he smiled.

“Where did you learn your English,” I asked in my shaky Spanish. This man dressed in khakis, a light-weight jacket and Panama hat had impressed me with his accent and fluency. He’d come from a small mountain village north of Quito, but spent much of his adult life as a restaurateur in Naples, Florida.

That night at his new establishment we found the food to be an enjoyable blend of traditional Ecuadorian fare and American favorites. From that day on Colón has been a close friend,someone who helps us with Spanish and who explains the culture as we bump along on our journey.

Not too long ago, the three of us visited nearby Inca ruins, traveling into the high Ecuadorian Andes by local bus. We had to maneuver 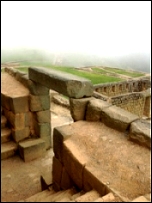 a critical bus switch, taking us on a hike that wound through an active Canarian town filled people and markets before getting to our destination. We would never have found the right bus for Ingapirca, without Colón’s help.

Even miles away from home, as he passed out his business cards to others visiting this Incan archaeological site, we couldn’t help but notice Colón running into old friends. They would embrace, sometimes with a quick kiss or a pat on the shoulder.

This popular Ecuadorian has helped make our move to a new country a real and human experience. Once, he even showed me how to toss an omelet!

Pursuing a Passion at any Age