Beyond Beach Resorts and Tourist Towns – finding the real Mexico 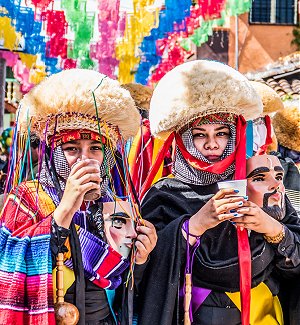 Situated on the banks of the Rio Grijalva, in the state of Chiapas, in the far south of Mexico, is Chiapa de Corzo, one of Mexico’s Pueblos Mágicos or magic towns. There’s a magical feeling in the cobbled streets and colonial architecture, but it’s during the festival that the magic really happens. Every year Chiapa de Corzo is home to the Fiesta Grande de Enero, or the Great Festival of January. The festival, which includes a huge fair in the town square and a spectacular fireworks display, celebrates the patron saints of Chiapa de Corzo. It also celebrates and honours a woman of Spanish descent and her servants who helped the town during a famine in the 1700’s. Parachicos, Chiapanecas, and Chuntas dressed in colorful costumes parade through the streets to various churches and to special family chapels. The festival lasts for two weeks from the 8th to the 23rd of January. 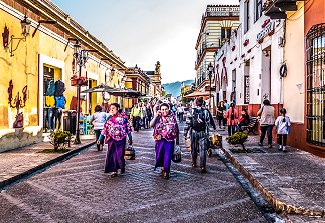 The state of Chiapas is second only to Oaxaca for the highest concentration of indigenous people in Mexico. If you’ve been to the Fiesta Grande de Enero in Chiapa de Corzo, and you still want more of Mexico’s indigenous cultures head down the road to San Cristobal de las Casas. Here you will find a delightful mix of modern sophistication and traditional Indian ethnicity. Nestled in a valley of the Los Altos Mountains this tile-roofed museum city has wide pedestrian streets with a variety of restaurants, cafés, and bakeries contrasting with a thriving and colorful market, and a living indigenous culture. Don’t miss the magnificent cathedral and the glorious Baroque Santo Domingo Temple. 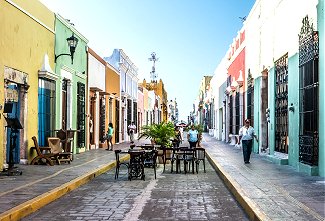 Campeche you had me at hello! On the west coast of the Yucatan peninsula, and facing the Gulf of Mexico, Campeche, in the state of the same name, is a fully restored, walled, Spanish-colonial museum city. From the moment we entered inside the walls of the old town and saw the streets of impeccably renovated candy-colored buildings we were smitten. We’d stepped into a pastel-frosted fairyland.

The Conquistadores founded the city in 1540. It became wealthy and important because of the port and remained so until the early 1800’s. The walls were built to protect the town from pirates. Outside the walls modern Campeche is a regular city, much like many other Mexican cities. Within the walls it is as if we have gone back in time, only now it is an oasis of calm, an unexpected dreamland with sophisticated cafés and restaurants, and the only pirates to be found are mute replicas. 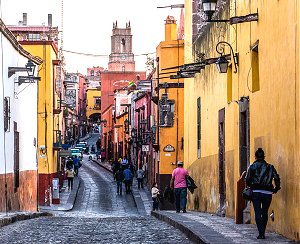 San Miguel de Allende, in the centre of the country, is a Spanish colonial town founded in the 1500’s. The historic Centro district is a UNESCO World Heritage site. It is a cosmopolitan artists’ community with about ten percent of the population being from Canada, USA, and Europe. The town is rich with cultural performances and gatherings, and excellent restaurants and cafés. There is a large, and much used central square with Parroquia de San Miguel Arcangel, the town’s iconic pink confection of a church, along one side. Beyond that there are cobblestone streets of gorgeous rust and ochre-colored buildings. Wandering the streets there is a soothing sameness to the sheer walls with the patina and earthiness of bygone times. The buildings seem to have a grounded certainty, and a timeless majesty. Then, as you walk, there are sudden vignettes as churches, lace-curtained windows, a curved street, or an elaborate doorway entice the eye with contrasting views. It’s an ever-changing kaleidoscope of architectural beauty that lands quietly in the heart.

Observations of a Retired Person