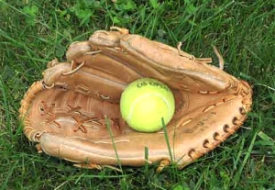 Play ball! The season is underway again. Growing up, I was pretty good at baseball in our backyard if I could get by our dog, Lassie. When I was 9 or 10 years old, playing baseball on a borrowed high school diamond, I longed for our backyard. I was always sent to right field to minimize the damage. I’d stand out there hoping no one would hit anything that far in my direction.

My batting talent was inversely proportional to the pitcher’s speed. I watched in amazement the first time I saw a curveball coming at me. Facing a sidearm pitcher, I ducked and fell to the ground for five pitches, three of which were strikes.

After hanging up my carefully oiled glove at age 10 or 11, I wondered if my failure was lack of talent or the fact that I wasn’t wearing glasses yet. In college, I found an even better excuse…uh…justification.

During an Air Force ROTC physical, I was told I had zero depth perception. Zero! Picturing myself walking into walls, I stifled a laugh. The airman giving me the test results was trying so hard to let me down easy. I could be a navigator, he explained, but I could never be a pilot. Although I had no desire to be either, my heart went out to navigators. 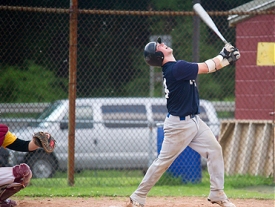 Forget hardball. I was a softball star! I only played softball once–second base–but I made an extraordinary double play. And I hit the ball. That epic game was played at the summer camp where I passed my Advanced Swimmer (note the capital A and S).

Even if the other players are still talking about my perfectly executed double play, I’m not sure softball was played anywhere else in the world at the time; certainly not in my neighborhood. It was years before softball gained any popularity.

A colleague used to go off to play slow-pitch softball after work. I should have asked to try out for his team, Club LaLa, to see if I was still a softball phenom. It would have been very cool to have a t-shirt with the Club LaLa logo (censored here) and my own slow-pitch softball card. I would have come up with a fitting moniker for my card; maybe “Z” for Zero Depth Perception.

I don’t know what fate befell the stacks of baseball cards my older brother and I accumulated. Presumably it was our mother after she rid the house of comic books. The Brooklyn Dodgers was my brother’s team so it became mine. Yeah, I’m one of those diehards who can still name the players.

Opening packs of gum that contained cards other than Dodgers was an opportunity to trade, especially if they were Yankees. When the Dodgers left Brooklyn, my interest in baseball waned. It took almost 50 years before I started watching again. 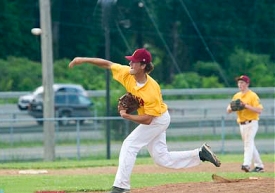 Living near Washington, D.C., I began rooting for the Nationals. (My brother is much more forgiving; he stuck with the Dodgers.)

My reputation eventually caught up. I was invited to join a farm team. It was a pick-up game with my wife’s family in a field between the barn and hangar.

Gripping a bat for the first time since summer camp stardom, I swung at the first pitch, hit the ball a mile (well, almost), dropped the bat, ran uphill toward first base and pulled my left hamstring, thus ending any chance of resuming my baseball or softball career. Oh, the tenuous life of an athlete!

Why Plan for Retirement Leisure?