A Journey through Jordan

Jordan is a cream and blue land. There are pockets of colour: Petra is rose-pink and soft orange; Wadi Rum is all burnt orange and deep chocolate; there is lush green vegetation along the river in Wadi Ibn Hamad; but as you drive through Jordan from north to south and back again what you notice most is the sameness of the landscape. It’s cream and blue – all scorched creamy coffee desert land and intense azure sky. 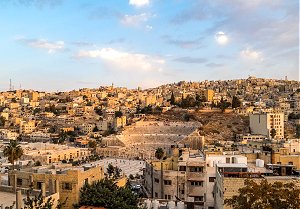 In Amman, the capital, all the buildings must be faced with the same warm cream local stone, seen here glowing golden in the late afternoon sun.

My husband and I have been travelling independently for the past five years. Our research, however, revealed that public transportation in Jordan is limited and not clearly publicized, not even in Arabic, let alone in English. Locals simply know the system, but for a visitor it can be difficult. We decided for the first time, with the exception of a Galapagos cruise a couple of years ago, to sign up for a tour. We arrived early and had a couple of days in Amman to ourselves. We then joined a one-week ‘highlights’ tour that took us from Amman to Jerash in the north, west to the Dead Sea, and south to Petra, Wadi Rum, and Aqaba on the Red Sea. There’s nothing quite like the luxury of being on a tour and having everything taken care of, especially after years of independent travel. 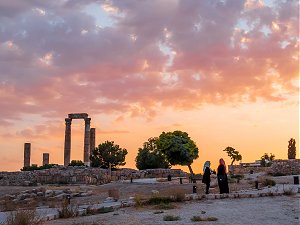 The Citadel sits atop one of the seven hills of Amman. The site has a long history of settlement by several different civilizations, dating back to the Bronze Age. Most of the buildings are from the Roman, Ottoman, and Umayyad periods.

Meanwhile down in the Balad, the bustling downtown core of the city you can experience modern Amman. It’s a real taste of Jordan with its labyrinth of narrow alleyways, and vendors selling everything from fruit and vegetables, clothes and spices, to souvenirs and hardware. 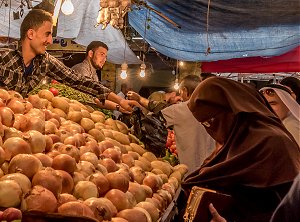 It’s a commotion of mosques, souks, and coffee houses all competing for attention.

A short drive north of the city are the ancient Roman ruins of Jerash. Thanks to a fertile valley the area had been inhabited for several thousand years. A city was established, and in 63 BC Gerasa, as it was then known, became part of the Roman Empire and the golden age began. It is one of the world’s best-preserved Roman provincial towns. Entering through Hadrian’s Gate we found paved and colonnaded streets, a grand public plaza, and lofty hilltop temples. There were once baths and fountains, a complex drainage system, and a main street lined with shops, public buildings, and the homes of the wealthy. The ruts in the paving from countless chariots help bring the scene to life. 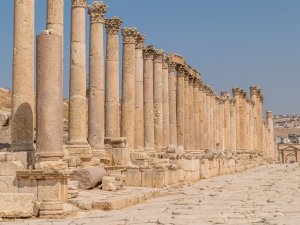 It’s a grand imposing place and among the best of the many Roman ruins that we are still able to explore today.

From Jerash our tour took us to one of the more surreal experiences of my life: floating in the Dead Sea. The Dead Sea has the highest salt content of any body of water in the world and floating in it is unique. You walk into the warm water and simply sit. On lifting your feet you’re immediately bobbing like a cork. 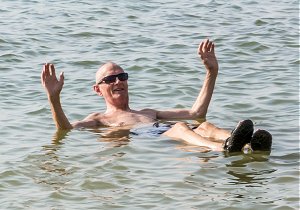 Add to that you can cover yourself from head to foot in the black alluvial mud found along the shores for a healing skin treatment, and the Dead Sea is a truly exclusive spa.

We returned to Amman for one more night and the next day drove south. On the way we stopped to view the remains of the oldest known map of the Holy Land, created in the 6th century by an unknown artist. The map lies on the floor of the small Byzantine church of Saint George in the town of Madaba. Crafted meticulously from colored glass and stones, the map depicts the Holy Land in great detail. Our next stop was at Mount Nebo, the place where Moses was granted a view of the Holy Land, and from Mount Nebo we drove to Kerak Castle. 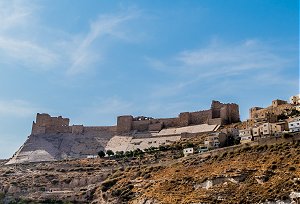 We spent an hour or two exploring this fascinating and extensive Crusader castle built about one thousand years ago by Paganus, the man who used to be butler to the King of Jerusalem.

From Kerak we drove on to the place we’d all been most anticipating: the remarkable Nabataean city of Petra, one of the great wonders of the ancient world, and unsurprisingly Jordan’s most visited tourist attraction. We arrived in Petra at the end of a long and very full second day of the tour.

In my twenties and early thirties I travelled extensively on and off for nearly eight years. Since we retired five years ago my husband and I have been travelling more or less continuously. I’ve seen a lot of amazing things, and been to a lot of incredible places. Petra is among the most extraordinary and wonderful places I’ve ever been to. If you never go anywhere else in Jordan go to Petra. It’s possible to fly into Aqaba and do a day trip to Petra if that’s all you want to see of Jordan, but Petra should be on everyone’s bucket list. It is certainly one of the highlights of all our travels.

If I have to live with Dementia