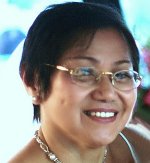 XCarol Colborn Background:
Former CEO of Philippine IT pioneers, Carol migrated to the US to take care of grandkids. She met and married Bill and they cruised North America in an RV for four years. Her book on their travels, Carolina: Cruising to an American Dream has been published. Carol has a BS, MBA, and DPA abd from UP.

Please check out Carol's RV Cruising Lifestyle blog and her Carolina: Cruising to an American Dream book website. The book is available in both paperback and e-book formats online in Amazon, Barnes and Noble, and iUniverse. 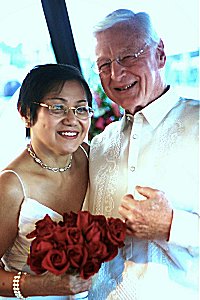 “Don’t just dream; dare!” That’s the first line of my book. Yes, I not only had a dream but I dared. I retired in a foreign country, traveling in an unfamiliar way with a Caucasian husband. There were indeed tremendous risks, but there were also overwhelming rewards. It was good I was financially prepared, and I was lucky to find someone who shared my passion. At 55, I still believed that a Santa Claus would bring gifts, especially if you’ve been good!

In 2002, my calling card read Carol E. Carreon, Chief Executive Officer, BayanTrade. A year later I tried to slow down and became a consultant to the company. In another year, I found myself in North America where two of my three daughters made their home. I had to recast my hectic lonely life as a single Mom. “I wanted time to cook a little, teach a little, travel a little, write a little, and love a little.” I thought the last one would be impossible to do in the Philippines. At my age, all the good ones were taken!

From humble beginnings near the esteros (polluted small water canals) of Manila, my parents unwittingly lit up a fascination for America. This fascination turned up several notches due to some life-changing events. Although my first two years in America were a HUGE misstep in Texas, I decided to stay and moved to Seattle where I was happy babysitting and cooking for my eldest daughter and her family. But soon I was again caught in the web of a driven life: teaching in two colleges and a university and counseling small businesses for SCORE. Check: cook and teach, although not a little, but a lot! 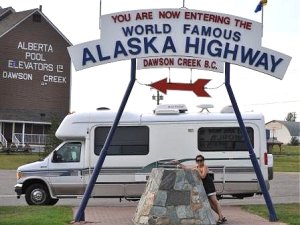 Enter a knight in shining armor. Bill was almost as driven as I was. He was President and CEO of a national business printing company, owner of a printing franchise, board director for the Document Management Industry Association, active in church and politics. In 2007 we “fashionably” met on the Net and, although initially he did not seem to qualify, he redeemed himself in person in a big way. At 8 pm on 08/08/08, we married on the cruise ship “Champagne Lady” in Washington’s Lake Union. Soon Bill sold his business; I resigned all my posts and in June 2009, we bought a used 24-ft. Class C motorhome and started crisscrossing North America. Check: love and travel, again not a little, but a lot!

Throughout our travels, homes, museums and grave plots of great American writers inspired me to no end. Several traveling budding writers I met encouraged me to write. A couple who maintained a humor blog taught me the basics. Bill bought a Nikon DSLR, and he tossed the ball back to me. On March 2010, my blog was born. Today, it has three hundred posts with almost 600,000 views, half from the US, the rest divided among France, UK, Germany, the Philippines, etc. Check: write a little! All my five wishes had come true!

But it wasn’t as easy as it sounds. In June 2010, I missed an appointment with the Commission on Immigration Services in connection with my application for US citizenship. 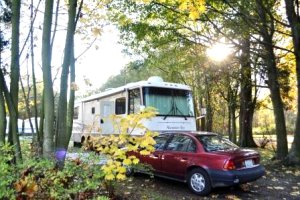 We had just upgraded to a bigger RV, but we crossed the country fast to appeal my case in Washington. After six months of waiting, on Valentine’s Day 2011, I finally took my oath as a US citizen. In taking the oath, I technically lost my Filipino citizenship, and the thought that I was forgetting and forsaking my roots haunted me.

As momentous as the occasion was, it was more the extensive witnessing of America’s grandeur, inspiring history, and diverse people that changed me. In 2012, driving up the East coast of the US, I accepted I had become an American. But my Filipino heart was as strong as ever. I was more keenly aware of the similarities and differences in geography, culture, and history between my two countries. I realized I had the best of both the developed and the developing worlds. In October 2013, in the Philippines Consulate in LA, I pledged my loyalty to the Filipino flag again and became a dual citizen.

With this settled, I felt complete freedom. And the more we traveled, the more I realized we had become more than tourists; we had become explorers, adventurers, and pilgrims. Although I still plan the details of what to see and do, we cut short visits when we feel we have seen enough. But we extend them, too, whenever local magazines point to untried experiences, locals tell of less-known places or arrows point to intriguing spots. We have become true Wanderers.

But what I thought was going to be a never-ending honeymoon was not to be. In 2010, we upgraded to a 37.5-ft. Class A motorhome with one slide and bought a membership into a network of campgrounds. After I had become a US citizen, we slowed down and slipped into an ordinary married life. Little did we know the rigors of the road were taking a toll. Health issues grew as cultural, gender, and personal differences rose. We were slowly drifting apart. I sorely missed the social support system of the Filipino. The RV community is mainly white, and I had met only a couple of Asian, Hispanic and African-Americans.