Where will all the retiring Boomers live? 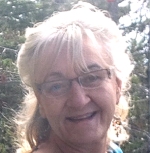 She has worked in 5 Canadian provinces and 2 foreign countries. Her unique blend of health care and architecture result in an understanding of lifestyle requirements at every age. Rita answers the question boomers all over the world are asking, “How Then Shall We Live?”

Current retirement housing options lack innovation and are not affordable for the average Canadian. Rita has found retirement housing projects that are innovative, unique to their environs and affordable. She has developed a workshop to share this information, and to begin germinating local ideas. Every workshop is different because people are different. Cookie cutter solutions do not work.

Join Rita to discover the potential in your community, and for yourself.

You can reach Rita via email for information.

I woke up. I had been dreaming about Tupperware.
The two quart green one with yellow, orange, and green pint sized ones inside.
I had lost a lid and wrote to Tupperware: With pen, paper and a stamp, and in no time, had a brand new lid, but alas it was clear. No colour. My kitchen décor, ruined!

It was 3am, and I began thinking about how we all fit together, and how we are breaking parts, loosing bits, and trying to keep the whole scheme coordinated.

I vacillate between, what’s next on my bucket list and how then shall we live? This issue of housing, and caring for, the aging boomer tsunami appears to be causing some distress in board rooms and soup kitchens.

I have been researching the question, “how then shall we live?” for a long time.
In Canada, in 2011, the average income of a person over 65 years of age was $32,500/year. I know that is not enough to pay the $3-10K a month for assisted living when the inevitable time comes to admit, I need help.

My current choices appear to be: living in one room, buying a one way ticket to a country which has flexible euthanasia laws, or ditching my husband and hooking up with a rich, young man. The latter being as likely as discovering I am the sole heir of a Duke.

What about living together? Three or four of us in one big house like the golden girls, relaxing on the lanai. The house sharing solution has its potential in the form of a higher economic lifestyle together as opposed to making ends meet alone: However, I remember what growing up in a family was like and query the legal costs in preparing a contract, and the renovation costs to ensure we all have private baths, sitting and dressing rooms.

Boomers don’t share well. The generation that invented open ended travel, and the suburbs, has never been big on group cooperation, and that isn’t going to change now. With every age bracket they’ve entered so far, boomers have marked a decline in civic participation, including voting, municipal meetings, petition campaigns, letter-writing and responding to pollsters, least of all the neighbor asking to borrow the lawnmower.

The boomers are the largest and wealthiest group, moving through time together, in history. They are the people who changed music, dress codes and office etiquette. They learnt to use smart phones and snowboards: And are beginning to redefine the retirement home. Some ideas that are being trialed are, The Small House Community, The Green house, The Sotel (Service Oriented Technically Enhanced Living, a hotel-like building with apartments surrounding an open, climate-conditioned atrium), many versions of The Village, and several more.

Boomers are not interested in living in the remote retirement homes looking onto empty fields, designed with lots of parking to attract visitors. Boomers like to congregate around universities and colleges, art and music hubs, sports and coffee shops, recreation centers, faith and community centers, nature parks, and historic landmarks.

This alongside headlines such as: “low income housing residents anxious as Ottawa ends subsidies…..”, “17000 housing units set to lose their funding in the city of Vancouver…”, “Toronto faces more housing funding cuts….”, makes clear the fact that the boomers are not only expected to redefine their retirement home but to pay for it as well.

I’ve been advised to “embrace old age” so that I can plan my dive into the tepid water, rather than having a cold shower forced on me. And so that is what I do. I gather people together. People who are asking, How Then Shall We Live? I have discovered that the currently available housing options for our senior years are limited, and increasingly becoming the milieu of the businessman and less the jurisdiction of the subsidized civil servant. But I have also discovered some alternatives, locally and internationally.

We need to plan while we have the energy and assets, because it takes anywhere from 3-10 years to develop a project. Less time is required to develop models such as shared house or the virtual village; and more time is needed for models such as green house, sotel, small house, and integrated village.

Boomers like to create things, and are good at organizing. Together we can plan retirement housing solutions which are local and user specific, like the matching Tupperware lid, designed to enhance your decor.