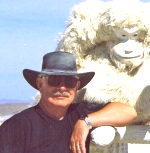 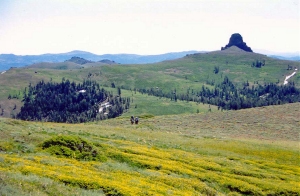 Our starting point, Carson Pass, was named for the explorer Kit Carson who had led a group over it in 1844 seeking a new way into California. Bad weather conditions led to limited food supplies, which in turn led to the group eating the dog, a horse and a mule. Unlike the Donner Party, they avoided eating each other.

We had good weather and weren’t lacking in food but we also avoided a near tragedy. Nancy, who had started trekking with me in her 20s, had reached that age where she took lots of pills. On the second night out, she decided to take them all at once– without water. When her only response to our concern was “ack, ack,” Ken decided that the Heimlich maneuver was in order, thus saving Pape’s life. Nancy went back to taking her pills one at a time with water while we continued our journey down the Pacific Crest Trail.

The third section of my journey is one of my all time favorite hikes. The trip begins at Kennedy Meadows and ends in Tuolumne Meadows, traveling through 70 miles of road-free, drop dead gorgeous, high Sierra country. This time Marvin Todd and Tasha’s husband, Clay Cox, joined me.

Clay’s big frustrations were that his 60-year-old father-in-law hiked up mountains faster than he did, and that there was never enough time to fish. Marvin, who was born on the same day as I, is a psychologist who has always believed he can talk trails into going where he wants. Consequently, he gets lost a lot. I’ve had to retrieve him several times over the years.

The really big story about this section of the trek was the bears. Clay discovered one on our seventh day out that was demonstrating how big and strong he was by standing on his hind legs and raking his claws down a tree. I subsequently discovered how fast Clay could really hike. He was several miles down the trail when I finally caught up with him. Then things became even more exciting.

We were supposed to hike into the Yosemite High Sierra Camp of Glen Aulin that day and meet our wives who were hiking in from Tuolumne Meadows with steaks and cold beer. 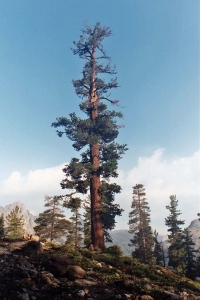 That’s a lot of incentive, but it was a really, really long day. By mid-afternoon dark clouds were threatening and camp was still miles away. The problem was that we had the tents. Peggy, Tasha and Mary Carol might get caught out in the storm. I proposed that I take my tent plus Clay’s and hoof it into camp. Marvin and Clay would follow along with the third tent and camp out on the trail if they couldn’t make it to Glen Aulin. It was a good plan, and indeed I did make it.

Marvin and Clay didn’t. Their shelter was a small backpacking tent designed for two people who like each other– a lot. Clay’s a big fellow and Marvin is far from tiny. What promised to be a long night became a lot longer when a bear started sniffing around outside the tent and proceeded to eat the food that Clay thought he had stuffed safely up a tree. (Keeping food away from Yosemite bears is both science and art.)