What a Difference a Generation Makes 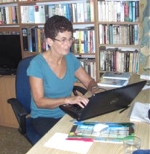 XBeryl Belsky Background:
I was born in Ireland, grew up in Australia, spent a year in Japan and several years in the UK, and currently live in Israel. I am a graduate in East Asian Studies from the Australian National University.

As a professional academic editor for over 30 years I've always envied writers. But it was only a few years ago, prior to my retirement, that I began writing – or rather blogging – myself. I began with two blogs, The Asia Connection, and Faces of Tennis.

Sometime after that I decided to expand to a full website, one whose focus would not be on my own writing but on the creative work of other writers. The result was The Writer’s Drawer, a free, intercultural showcase for almost all genres and all levels of writing. Its uniqueness lies in the free editing support that I offer, and in the annual anthology of stories and poems from the website that I have begun publishing. The first volume in the series, A Certain Kind of Freedom: Stories and Poems from The Writer’s Drawer, came out in late 2013. The deadline for submissions, especially of short stories, to the next one, is September 15, 2014.

I am not technologically au fait, as some of my friends and acquaintances seem to think I am. Far from it. Just because I launched a website from scratch doesn’t mean that I am up-to-date with all the latest technological developments. I am acquainted with Windows and Word and the internet, and a year or so ago I was given a smartphone. However, until not so long ago I had never read an ebook, nor had the inclination to read one. But, eventually, we all (or most of us) have to face up to progress. In my case it was the “gift” of an ebook. I duly accepted the gift by clicking on “Accept gift,” but then I was stuck. Not having a kindle, I was going to have to read it somehow on my PC. But how?

At a loss, I waited a week until my son turned up. I grabbed him and explained my problem. With that impatient “look” of my son’s generation which says everything about their dinosaur parents (“Aw, c’mon, Mum, it’s not that complicated”), he sat down and began fiddling with keys and windows. After a few minutes and a barked, “What’s your login and password?” he had downloaded the book on the application KindleforPC, enabling me to read it on my computer.

It doesn’t matter that he’d never done this before. For him it was just downloading another application. There is no fear that he’s going to do any damage, no hesitation; he doesn’t get stuck. It doesn’t work this way? Then try another. Fingers fly over keys; windows open and close; problem solved in the end. Open and shut case.

You might be interested to know whether I am enjoying my KindleforPC experience. The truth is it did not last long, as sitting in front of a computer is not my idea of relaxation. “Get a kindle,” my son and others of his generation (and even of my own generation) advised. “It’s so comfortable and easy to use. You can carry it anywhere – on a plane or a train, in a coffee shop, read it in bed…” So I got a kindle. And I do use it, especially if I’m away, since it’s less cumbersome to travel with than lugging a couple of books with me. But I still hanker after the feel of a real book, even if it is a paperback, and do buy them sometimes. The stories that have remained with me are not those that I’ve swiped page after page on kindle but those that I have lovingly and literately turned page after page in a real book. Somehow, the books on kindle have not been so memorable – or maybe it’s because the books I chose to download were just less good. But the fact remains that I miss being able to flick backwards and forwards in a real book to remind myself of a character or a scene. And hey, I can’t even remember the title of the book I’m reading on the kindle sometimes, whereas with a real book the cover is always a motion of the hand away.

Although my son’s generation was not born with an iPhone or a kindle in their hands, as the latest generation seem to be (just look into a pram sometimes and you’ll see the tiniest babies playing with their parents’ hi-tech gadgets), they were introduced to computers at a young age and grew up along with the latest technology, adapting to it seamlessly. Not so us dinosaurs, who began learning computers near or into adulthood. It has been a steep learning curve and many of us are increasingly lagging behind. New applications appear every few weeks to download on our smartphones. I communicate with people all over the world on WhatsApp, for instance; two years ago I’d never heard of it. I have learned to use social media such as Facebook, Twitter and LinkedIn, although most of the content I find on them is trivial and/or of no interest. But I persist since I run a website and it is a way to keep in touch with people no matter where they are.

But, I ask, what is the world going to be like in thirty or so years when those smartphone babies become adults? Are my son and his generation going to be able to keep up with developments then? Or are they are also, in their advanced years, going to be the recipients of that “look” which my son directed at me?

13 Rules to Avoid the Scamming Game