We Ain’t Done Yet

June 18, 2018 |  Category:   Life  |  Add Comment
Author:   Irwin Lengel  posts:  8    Author's   bioXIrwin Lengel Background:
Irwin Lengel is a retired Underwriting Manager from Lakeland, Florida. He and his wife Dolly have recently become snowbirds of a sort, traveling to Honesdale, PA for the summer to spend time with one of their sons and be able to visit brothers, sisters, and cousins in Reading, PA where both he and his wife were born. They enjoy traveling, line dancing, cruising, and spending time with friends and family. A great day or night for them is to be line dancing somewhere.

Irwin has written one book so far, Love, Marriage, Retirement, and Gratitude and is working on another one. You can check out more about Irwin and his writing here

You can also reach Irwin via email. 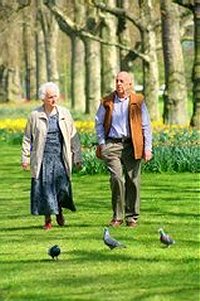 Did you ever believe retirement could be so much fun? It is hard to believe that we will be retired 22 years this coming December. In the beginning we were a bit skeptical about how we would survive. I mean we were used to two full-time salaries and were going to drop down to one partial pension (I needed 30 years for a full pension and was let go at 25 years) and the small but useful pension my wife received for her ten or eleven years of service at her job. This was going to have to last us until our Social Security checks would start coming in which was several years in the future.

But as luck would have it, working part-time during some of those early years, downsizing into a smaller house resulting in lower spending of our limited income, well, let’s just say that here we are 21 + years later still plugging along. By watching our pennies and being careful with things we did and purchases we made, I am happy to say that all worked out for the best.

By now I guess you are thinking – OK – where is this going and how does it deal with retirement? Well, this morning I happened to read an article that sort of brought back memories as to how we came to be retired and how we addressed the situation. One thing we did not want was to end up as lonely, bitter, unhappy retirees. The article relies heavily on the fact that prior to your retirement years, couples need to plan how they are going to retire taking into consideration all factors one reads about., i.e., finances, location, type of home, and so forth and so on. Don’t misunderstand me – all that is good and should be considered if – mind you I said – if – you are planning on retiring. Our situation was a bit different. Even though I was downsized after 25 years of working for the same company, fortunately I found another job rather quickly (less pay and less responsibilities) but only to be down-sized again after nine months on the job. We called it “forced retirement” at the time. However, instead of being bitter about it – we bit the bullet and said: “We can make this work.”

That same article mentioned that today’s retirees or those contemplating retirement need to not only dream about how they would like their retirement to go, they also need to plan how to accomplish what it is they want out of retirement. Fact is that had we drawn up an actual plan and followed it diligently as the article would have had us do, even though we are quite happy with the way things turned out, my educated guess is that had we actually planned a bit more than we did when faced with our retirement dilemma, we might have been in the type home and surroundings we still dream of.

But, instead of regrets, we sort of sit back and look at all we did accomplish these past 21 plus years and bottom line is – well, we truly appreciate how our lives did turn out. We still discuss, at times, things like how we might go about it at our age to eventually end up in the type home and environment we still dream of having.  After all, we are only approaching age 80 and hope to still do a lot of living.

But I digress. Why no regrets?

Had we not downsized to the city of Lakeland, FL, we probably never would have worked for Busch Gardens as part-timers for three or four fun-filled years. And

Seeing that our children are scattered from one end of the country to the other, we tend to travel a lot. At this point, I would be remiss were I not to mention the fact that since retiring we have watched our pennies and have done quite a bit of traveling over these past 21 plus years seeing places we never in our wildest imagination thought we would get to see during our lifetime. Another fun part of this adventure is that we are not quite done as we still have a few places we hope to see before they put us out to pasture.

Bottom line is that once we retire, life is not over. We still have our dreams and goals. True, we must no longer put that suit and tie on or our coveralls or what have you that we did during our working years. But we still need to pay attention to objectives and goals. Set your objectives, goals, and so forth keeping in mind the fact that, as we did in our working life, the only way those objectives/goals are going to be met is if there is a plan in force that can be followed to make sure we achieve those goals.

Make a plan and then work your plan. Hopefully you too will find as much happiness and fun during your retirement years as we have been finding in ours. And if you didn’t pick up on the wording I used in the sentence before this one, take note that I used the word “finding” not ‘found’ mainly because “We ain’t done yet!” We are still finding fun adventures to have while we still have the oomph to do them.

Retire to France? What Were We Thinking?

The Dream Is In The Doing