Volunteering with monkeys in the Ecuadorian Amazon Rainforest

Marcelle quit her executive job in Switzerland in 2012 to explore new boundaries. She is the digital avid person, who writes and photographs for the blogs Travelbug and Animal Carers and interacts on diverse social platforms as @greyworldnomads, @animalcarers and @TravelingBeagle. She is an animal lover with great passion for dogs and horses.

George is craftsman, who gave up his campground and cottages in South Africa to join in the rousing explorations. Wildlife and history are his ardour, where as he gets into photography slowly but steadily as well. He is also the editor of the English written posts of Marcelle. At house sittings he is the handy-man to maintain and repair.

Please check out more about their travel stories and photographs on their blog Grey World Nomads.

Also please check out their latest video Waterfall in the Desert. 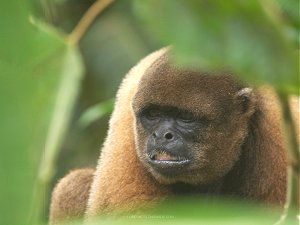 It was a dream come true as we found the opportunity to volunteer with wildlife in the Ecuadorian Amazon Rainforest. Far off from any civilization we would be caring for Woolly Monkeys and other indigenous animals. And yes – it became a once in a lifetime adventure!

It started on a bad note

At Buenos Aires International Airport we were refused entry onto the plane. You see – we had no onward ticket out of Ecuador. Although we explained that we would be travelling by bus to Columbia after our volunteering stint in Ecuador, the airline insisted on a proof of an onward ticket. Some quick work on the computer, booking the cheapest flight out (turned out to be a one way to Lima, Peru), we were allowed to board. 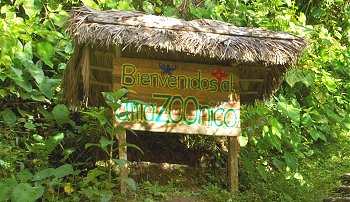 Our destination was a rescue center in the Amazon rainforest of Ecuador, started back in 1993 by a Swiss lady and her Ecuadorian husband, to reintroduce animals and birds back into the jungle. A lot of wild animals and birds are kept as pets only to be mistreated, discarded and so in steps Amazoonico, who then give them a home and try wherever possible to reintroduce them back into their natural habitat.

Amazoonico, as it is called, is a long and somewhat crazy bus ride from the Ecuadorian capital Quito to the small town of Tena on the edge of the rainforest. Another crazy bus ride (I say ‘crazy’ as it seems that the bus drivers here have a death wish or just want their passengers to sweat with the fear of defying death at high speed) from Tena into the forest to be dropped of a kilometer or so to our pick up point at the river. 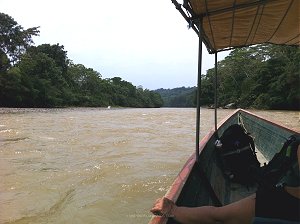 Here we were to meet a boat, which would then deliver us to our destination. We made it to the river where we could relax and waited a couple of hours, when finally our water taxi arrived.

After a few days of being shown the in’s and out’s of Amazoonico’s working, it was off deeper into the jungle to spend approximately five weeks looking after five Woolly Monkeys that were in the process of being slowly reintroduced back into their natural habitat. 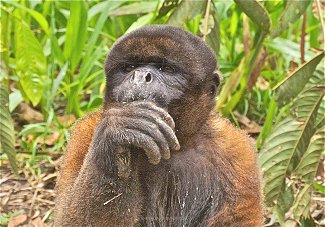 Once again we were dropped off on the road and had to trek about six kilometers on a slippery path to our quarters deep in the forest. Our ‘house’ was a three level wooden structure consisting of a storeroom, couple of bedrooms with some wooden beds and no real mattress to speak of: a one inch piece of foam, some not too clean linen, shower (cold water only), toilet and a kitchen with a gas stove which felt like it could blow up at any time. 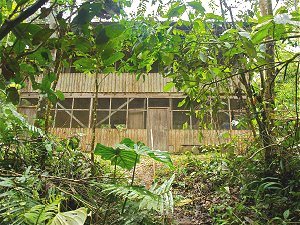 To reach the ‘house’ a river needs to be crossed by means of a very small seat attached to a cable. One then pulls on overhanging rope, about twenty meters long, to get to the other side. When it rains the river fills up pretty quickly and comes down in a flash flood, which can be a little scary.

With Woolly Monkeys in the Jungle 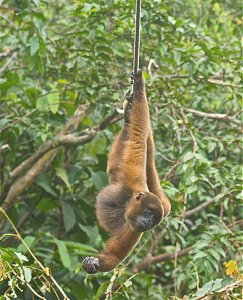 The resident vet introduced us to our monkey friends who would then return to Amazoonico after giving us the rundown: monkeys to be fed twice a day, a combination of fruits and supplements. In the morning the monkeys were let out of the cages after feeding and returned to the cages for their evening meal, where they would spend the night.

For most of the day they were free to roam around but being used to human contact tended to spend their time hanging around us. For our part there were some chores to do: clearing paths, fixing up around the house, all the while trying not to blow ourselves up, when using the very dodgy gas stove.

Breaking up (with your car) is hard to do

Coming of Age in Aging America