I’m off to the Canarian island of La Palma, which is also known as ‘The Beautiful Island’, again next week. Although I live on the island of Gran Canaria, all of the seven main islands that make up this fascinating archipelago are very different to each other. I try to visit each island from time to time, but I am particularly fond of La Palma, which is the fifth largest of the seven main islands, covering an area of around 706 square kilometers, with a population of around 90,000 people, most of whom live in the island’s capital city of Santa Cruz de la Palma. 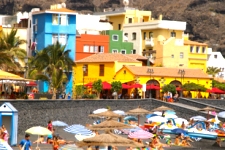 It is a lush, green and wooded island, with beautiful forests, and is a walker’s paradise. Clear skies make this island a stargazer’s paradise too, which is one of the reasons that a number of international telescopes operate on the island to monitor the night skies. The island offers the most diverse plant life of all the Canary Islands, together with species such as the La Palma Giant Lizard, La Palma Chaffinch, Quail and Goldcrest, all of which are unique to the island. Since 1983, the island has been one of the UNESCO World Network of Biosphere Reserves. Should tourists wish to escape sun seekers heading for the beaches on the larger islands, this is the place to come.

It has been suggested by some that one day, far into the future, La Palma will be the cause of one of the largest tsunamis that the world has ever known. Indeed, to clarify its awesome status, it has been referred to as a megatsunami in waiting. This is based on the hypothesis that rising pressure caused part of Cumbre Vieja, which is a volcanic ridge in the south of the island, to slip towards the Atlantic Ocean and that during a future volcanic eruption, part of it would slip into the Atlantic. Currently, the Cumbre Vieja is dormant, with the last eruption taking place in 1971.

Should the worst occur, it has been speculated that the resulting megatsunami would create a giant wave of around 49 meters (160ft) causing devastation along the Atlantic coastlines of North America, wiping out New York, the Caribbean and the north coast of South America, as well as affecting an area of around 25 km (16 miles) inland from the coast. From the moment that part of La Palma falls into the Atlantic there will be a period of about 6 to 8 hours before it hits the American coastline. In any case, should the worst happen, it is not supposed to happen for another ten thousand years or so, which should allow plenty of time to move home.

I should also make it clear that many eminent scientists and geologists have refuted this theory as pure hype, and claim that La Palma is stable and will not fall into the sea. It is claimed that this is a disaster theory invented by researchers intent on gaining funding for their own research projects. Others claim that this is a convenient story exaggerated by US insurance companies, intent on raising insurance premiums, as well as being seen as a business opportunity by the hazard industry. Even if the worst should happen, there would hardly be more than a splash felt at the other side of the Atlantic, and so New Yorkers should continue to feel safe.

There’s nothing like a good disaster story is there? After all, we all flock to the movies to see them. However, when it is closer to real life, it is not quite so entertaining. This story has already created many victims. Questions were asked in the British Parliament following a BBC television program that first revealed the danger, many Americans considered selling up and moving to higher ground, tourists cancelled holidays to La Palma, many expats sold their homes on the island and many charter flights to the island ceased.

As for me, I cannot wait to visit and explore the island once again. However, I will make sure that I do not jump up and down too energetically when I get to Cumbre Vieja – just in case!

Obsession For The Greater Good