Ten Reasons to Take Up Gardening When You Retire

XLinda Brendle Background:
Linda Brendle retired from the business world after 40 years of administration and sales in various industries. She cared for her mother and her father, both of whom suffered from dementia, for 15 years. Both her parents are at home with the Lord now, and she blogs about care-giving, faith and family at Life After Caregiving. She is also a contributor to Yahoo Voices, Red Letter Christians, Daily Burnsider, Assisted Living Directory, Soul Sitters and Don’t Lose Heart. You can find Linda on Facebook and on Twitter and you can reach her via email

I call myself a city girl, but I’m really not. I’m only one generation removed from the fields of West Texas where both Mom and Dad were raised. But Mom hated country life, and she and Dad moved into town as soon as they were married.

At first they lived in small towns. I was born in Merkel, a town so small that the only clinic was upstairs over the hardware store. The summer after I finished first grade we moved to Mesquite, another small town, but it was close to Dallas, so in spite of the local rodeo, some of the sophistication filtered into the suburbs. 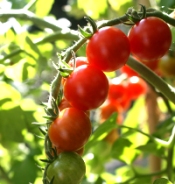 Dad liked to work in the yard, but Mom wanted no part of home-grown vegetables, so he planted flowers and trees instead. The only exposure I had to gardening was at Aunt Fay’s. When they lived in Balch Springs, they had a huge garden, and even when they moved into a really big house in the elite part of Mesquite, most of their backyard was planted with beans and tomatoes and other produce. The process was fascinating to me. The idea that a tiny seed could take dirt, water, and sunshine and turn it into something good to eat was nothing short of a miracle. It was like being present at the Creation: “Let there be…and there was…and it was good.”

Through the years, my country genes crept through from time to time. When I was single again I tried to raise a couple of tomato plants on the patio of my tiny, zero-lot-line home. An invasion of fat, green, squishy worms almost decimated my crop, but I managed to get a few scraggly tomatoes that my son used to make salsa. It was a small victory, but a victory nonetheless.

After David and I married, we planted some tomatoes and peppers in a flower bed. The peppers grew nicely, but some critter took a bite out of the bottom of every single tomato just as they were reaching the peak of ripeness.

Three years ago we retired to Emory, a tiny town in East Texas. The first year we were busy clearing fallen trees, briars and poison ivy, so I didn’t have time to think about a garden, but the second year my green thumbs started to itch. I missed the early planting, but before it got too terribly hot I planted some tomatoes and peppers. Again, the peppers did well, but I lost most of the tomatoes to critters, probably the large squirrel population that inhabits our 85 trees. 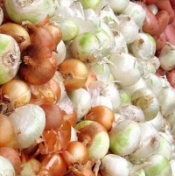 My enthusiasm wasn’t dampened, though. This year I got an early start and had more success. I had a good spinach crop, and although some of them were misshapen, my carrots did well. My garlic was a success, in spite of the gopher that took about a quarter of it, and my onions and potatoes did pretty well. I got enough yellow squash and zucchini to put some in the freezer before a fungus of some sort killed the plants. A successful crop of tomatoes still eludes me, though. I put in a dozen plants, and I even put a tent of netting over them, but the squirrels still managed to get a majority of them. I’m not discouraged. I’m already plotting my defense strategy for next year.

Some of my neighbors don’t share my enthusiasm, but most of them have gardened all their lives and have lost the childish sense of wonder that I feel when the first green shoots start to break through the ground. They’ve been there and done that, and most likely none of the traditional reasons for gardening will change their minds.

Obsession For The Greater Good