May 19, 2017 |  Category:   Retirement locations, Travel  |  Add Comment
Author:   Dan LaCombe  posts:  6    Author's   bioXDan LaCombe Background:
Dan LaCombe is a recently (early) retired Planner from the State of Delaware (23 years). He has been active all his life and now, with lots of time yet little money, embarks on one adventure after another, as was his life’s dream. Having taken journalism and photography in college, he worked as a reporter and photographer for the Ridgefield Press, early in his career, where he wrote numerous human interest articles. Several of his letters to the editor have been published in the News Journal. He is a modern day nomad with no permanent address and minimal processions. He plans to document his adventures in order to share this rewarding unconventional lifestyle with others.

It’s no wonder Thailand is such a popular tourist destination. This beautiful country has amazing food, friendly people, and so many fun things to do. There’s the big city excitement of Bangkok, gorgeous beaches, elephants to ride, and all kinds of other interesting things in between. During my recent Thai adventure I had many awesome experiences and wrote about two vastly different ones…

Chills and Thrills on Bangkok Streets 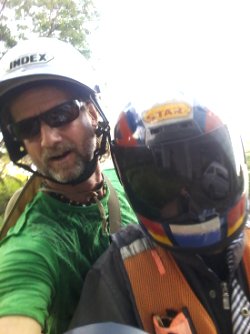 Going full throttle straight into oncoming traffic, we suddenly squeeze back between two cars – into the relative safety of our travel lane.

But we cross the double yellow line again and again, as vehicle gaps allow, to gain a few more positions each time. Am I inside a video game?

This was my first time on a “mototaxi.” You can spot them by the orange mesh vests they wear and you flag them down as you would the four-wheeled variety. They generally charge more simply because they get you there faster – it’s all about speed.

I don’t imagine this is what most people envision when they think about their retirement lifestyle. And that’s the beauty of retiring early when you’re still young enough and in good enough shape to experience adventures like this. That has always been my dream and now I was living it.

I just negotiated a 150 Thai bhat ($5) ride back to my hotel after multiple taxis and tuk-tuks had turned me down due to the location of my destination relative to an ungodly traffic jam. Bangkok was recently crowned king of the worst traffic!

I had expected a thrill ride, but I wasn’t fully prepared for the utter madness. The twenty minute ride also included a shortcut through a parking garage, zigzagging a path through a narrow alley crowded with stalls and shoppers, mounting a short section of sidewalk, and blatantly going the wrong way down a one way street.

It became abundantly apparent that this guy knew every shortcut imaginable and was fully prepared to ignore all written and unwritten rules of the road to minimize travel time. You see very few police patrolling the streets and this results in rather broad interpretation of traffic laws.

My large lunchtime Chang (beer) had thankfully given me a bit of “Dutch courage” for this potentially stressful experience. In fact, after a few early gasps I saw calm among the chaos and accepted my driver’s twisted genius; realizing that like in quicksand, the more I struggled the more I would be drawn down.

Shorty I got to a place in my mind where I actually thoroughly enjoyed the exhilarating journey through the streets of Bangkok. Leaning into the turns and celebrating our victories over vehicles lower down on the velocity food-chain.

When I eventually got off at my hotel the adrenaline was still flowing and I had such a high that I began walking away with the borrowed helmet still strapped to my head; the mototaxi man having to remind me to return it.

I thought to myself – you surly can’t buy more excitement anywhere for $5!

Learning to Cook Thai for Fun 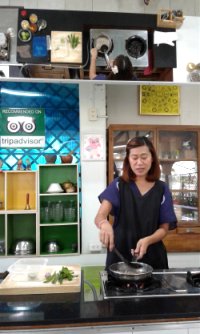 It doesn’t matter if you’ve never cooked or never plan to; that’s not the point. It’s simply a fun and delicious thing to do – attending a cooking class.

I’m no stranger to a spatula but this was my first official culinary education. I love Thai food and was in Chiang Mai, Thailand, so I didn’t have to think too hard when my gracious hostess offered to call her friend who operates a local cooking school.

A minibus picked me up the following morning and, along with five other foodies, we headed to the local market for ingredients and schooling.

First we watched how coconut milk/cream is made by grinding and pressing the “meat.” You can have it custom made to your liking, and of course it’s raw – never having been heated.

The husband of the cooking school duo (Vasin), took us around the covered outdoor market, pointing out interesting produce and providing fascinating factoids.

“The tree ant eggs are very popular but expensive”, he explained as a few ants moved among the prized orbs. Thai women traditionally shop twice a day. They have either no refrigerator or a very small one, thus requiring fresh goods.

Why I love southern India

Nothing can stop you – no matter how old you are