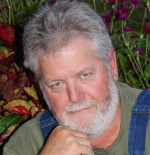 Burglary is a common occurrence at our rural, Northwest Arkansas home. How the thief gets in, steals what he wants, and gets out without leaving a single clue indicates a level of true professionalism. The doors haven’t been jimmied, the windows remain closed and locked, and yet numerous items continue to disappear. In fact, this thief is so clever and subtle; it’s darned near impossible to prove the missing articles ever existed.

Notifying the authorities is an exercise in futility and a waste of cell phone minutes. We’ve had the cops out a couple times. The county dispatches a glum-looking deputy who documents our complaint, scratches a few undecipherable notes on a yellow pad, and promises to patrol the area on a semi-bi-monthly basis—if and when—staffing and funds become available.

The only known witness to these crimes is our dog, Buster. I have interrogated him on numerous occasions and suspect he may be in collusion with the criminal. How he can look me square in the eye and refer to himself as a “guard dog” confirms his total lack of respect for the job title.

The tom-thievery in our neighborhood began several years ago, about the time my father started displaying early signs of dementia. Dad, who lived in the next house up the road, noticed a pair of rubber boots was missing. Three minutes and one phone call later, my wife, Connie, and I were enlisted to join the search-and-rescue squad. We spent hours combing hazardous terrain, fighting brutal cobwebs and a relentless army of dust bunnies. The boots could not be found.

My sweet and naive mother, who always thought the best of everyone, insisted the boots were merely misplaced and would eventually turn up. Dad was livid. “Hell no! They were stolen.” The thief had no need for guns, tools, electronics, or precious gems that might weigh him down. No! He had been coveting a used pair of size nine rubber boots for some time, lying in wait for the right moment to sweep down and snatch them for his own. Dad could just picture some guy stomping down the driveway, pant legs tucked in the boots, grinning like he’d just won the lottery.

Two months later, Mom decided to shampoo the carpet and asked me to help move the couch. It was then we discovered that we were dealing with the most vile and hideous type of criminal. One who would not only invade your home to steal rubber boots, but who would also break in just to bring them back.

Despite keeping a vigilant eye on personal belongings, items continued to disappear. Some would eventually return with little or no damage while others—primarily foodstuff, such as pies, cakes, and candy—never made it back. It was impossible to predict when the thief would strike, but we determined the best way to protect a pie was to cut it into sections and wrap our stomachs around the individual slices.

After Mom and Dad passed away, Connie and I bought their house, remodeled it, and rented it to a young couple. The thief, who had long coveted Phillips screwdrivers, tubs of margarine, and partial rolls of crochet thread, no longer took an interest in items at this address.

Instead, he chose to move his operation to the nearest house in the vicinity—ours.

Those who study such things will tell you that intelligent criminals target specific demographics. Much like predators in the animal kingdom, they seek out easy marks who are unable to protect themselves. This list includes the very young; those with physical or mental deficiencies, and of course (gulp) the elderly.