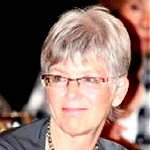 My map let me make this choice. I travel with Michelin maps, specifically the yellow departmentale 300 series maps. That day I was using number 342, “Hautes Pyrénées, Pyrénées Atlantiques.” They show me most (not all) roads. Nowadays, after 5 trips, I always search out the little white roads. Little white roads? 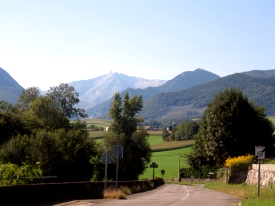 Now there is a phrase that only means something in the context of the map. Little, because the thickness of the line on the map is related to the busy-ness of the road. White, because these are the least traveled roads, though they may be departmentale roads. It sounds confusing, but once on a bike it is not so much. “A” roads: auto routes, like our interstates, bicycles forbidden. N roads: National roads, legal to ride on, but often very fast, and busy. Red roads: national and international. Sometimes fine to ride on, sometimes busy with fast traffic. Narrow red roads are likely to be better for bicycles. Yellow roads: interregional and less congested. White roads: local. Red, yellow and white roads can all be D roads: departmentale roads. I turned south on the D626, which became the D126, both with green lines running next to the yellow. The green indicates a scenic road. It was indeed scenic.

The maps also have a series of chevrons, indicating ascent or descent. >=5-9% grade; >>=10-13% grade; >>>=over 13% grade. That is why I believed this route less steep. There is a wealth of information to be discovered, by taking a close look at Michelin 300 maps.

But first, before attempting any road I needed to get some food. On my previous trip, in 2010, I had learned just what a mess I become on a bike without food. It isn’t something I can fake my way through, or ignore. I become a slug: a slow moving, tired, whiney mess, though I trust I keep the whiney part to myself. I have learned the technical term is bonking. It’s a good lesson to remember, and the lesson is ok with me, because when food is good I do like to eat. And in France, the food is usually good. I was in the outskirts of a small town, didn’t want to take the time needed for lunch in a bistro. 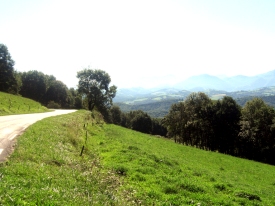 It was still morning, stores should not yet have closed for the lunch hour, so I went looking for a grocery store, or a group of them: charcuterie, boulangerie, fromagerie, épicerie. I found a group of tiny little wooden, freestanding buildings, unlike anything I had seen before, or have seen since, and purchased some ham from one, cheese from another, then fruit, bread, and chocolate. Packed my lunch provisions up in a pannier, turned back south, and headed gradually uphill, back towards the high country. I rode on one of the most beautiful roads I had ever ridden upon.

After perhaps 10 miles, this road led me to Ferrières, and the lunch stop that I described above. I stopped to eat just before the serious climbing began. That lunch, which I remember so clearly, was delicious. My unbidden memory of lunch brought with it the rest of the day, and the memory of the climb, which I remember equally clearly. The climb that followed lunch, was hard, steep, long and hot. Very steep, and very hot. I learned a lot.

The road climbed and climbed, and climbed and climbed. Then it climbed some more. That day I devised my strategy of climbing to a waltz rhythm, singing (in my out of tune way) whatever waltz comes to mind, with its 123, 123. Matching the pedal downstroke to the 1 beat alternates the emphasis from right to left foot offering mini rests while keeping up power, though a bit uneven power.