“Scritching” at a Mayan Site in Belize 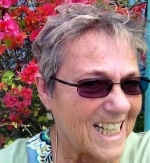 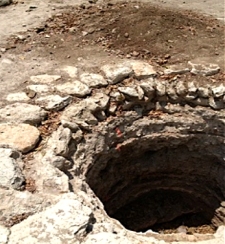 The young Belizean guys appeared to be terrified of the tarantulas, iguanas and small snakes that slithered and scurried out of their rocky crevices at the site. Spoon would let out a high-pitched shriek and bang the critters with a shovel. Colleen and I slowly modeled behavior that showed them to use the shovels to gently relocate the creatures. They got it! After a few weeks into the dig Spoon would come over to show us the tarantula on the shovel and look for approval. It was a great learning opportunity for all of us!

In the beginning, the experienced men in the group would keep a close eye on our activities. It was essential that we didn’t do any harm. Any artifacts, including small pottery shards, belong to the Belizean people. They were placed in heavy plastic bags, sorted according to the location where they were found, and would be sent for marking and identification and classification by students and professors at Galen University. Initially it was very difficult to tell the difference between hundreds of “just stones” and something that had been man-made. But gradually I got pretty good at it! I could pick up a small pottery shard and tell if it was from the lip of a jar or the foot of a bowl. Eventually even small body parts could be identified, feet, ears, lips, etc. We would often ask Jim’s assistance and he would show us how a lump of pottery was actually the body of a bird or part of a footed incense burner. It was a new adventure every day.

The highlight of the excavation was the discovery of an unlooted tomb!

We continued excavating the site until funding ran out. Then some restoration of walls began. Our support service (scritching) was no longer needed. On one of the last days we brought sandwiches, fruit, drinks and had a picnic in the shade of the tree. The party felt bittersweet. Archaeology sites in Belize are not open for people to just come an dig. It’s an honor to be included. It is also illegal to possess any artifacts. They belong to the people of Belize and are to be protected.

There is a lot more to the story of Santa Rita. Many more tales to be told.

We know there are many more artifacts at that site to be discovered. We are keeping our trowels clean and ready to return when asked. It was a great honor to scritch. 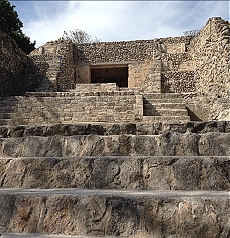 To commemorate that honor, the crew brought two mahogany seedlings and had Colleen and I plant them at the entrance to the site. “Someday,” they said, “your grandchildren will sit under the shade of these trees and know that you had a hand in making this become a reality.”

I’ve just heard that funding has been secured for additional excavation to the side of the temple. Then restrooms and a palapa will be built. And finally a protective fence will be erected. Santa Rita will be marketed as a wedding destination world wide. Perhaps I will be allowed to “scratch” again. I’m excited…. And I’m ready!