October 26, 2020 |  Category:   Health, Hobbies/Sports, Travel  |  Add Comment
Author:   Dee Tezelli and Steve Danishek  posts:  5    Author's   bioXDee Tezelli Background:
Dee Tezelli is Turkish born Kindle e-book writer. Her genre is mostly mountain murder mysteries based on true headlines and experiences. Her stories are written in her third language, English, and are written to appeal to all ages. With her Legal Administrator degree, Dee's stories often have intriguing legal twists too. Dee and husband of 43 years, Steve Danishek, founded and operated a very large travel agency in Seattle. Dee is finally retired and volunteers at the Pike Place Market Food Bank. Steve is toying with retirement from his busy job as a travel industry expert and media analyst. Dee and Steve live on the downtown Seattle waterfront.

Dee has written several ebooks including MAN FROM MT. FUJI, THE VOLCANO RULES, AFTERLIFERS AND THE MOUNTAIN and HEART MATTERS. You can find her books on Amazon 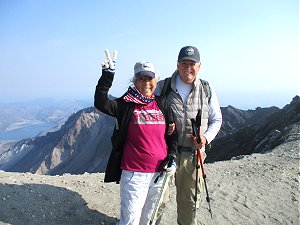 Thousands of us boomers were fortunate enough to grow up in the Pacific Northwest. We became passionate about the forests, trails and mountains here. There was always that one talisman – Mt Saint Helens, with its near perfect snow and glacier covered cone beckoning budding mountaineers. Early explorers labeled it the ‘Fuji Of The Cascades’ (My wife and I had the good fortune of climbing Mt Fuji in 2015 and while they looked alike, Mt Fuji is the longer slog.) For many like me, Mt Saint Helens was the first ascent of a ‘Major’. Conquering this volcano was a climber’s rite of passage and reinforced our passion for the mountains. We had joined the ‘Club’. That accomplishment allowed us the right to trade experiences, often amply embellished tall tales. 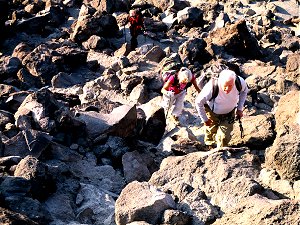 Climbing Mt Saint Helens -young or old- or any mountain, can have its ‘excitements’, whether falling into a crevasse, testing a snow bridge one time too many, or slipping and instantly remembering how smart you were to learn how to use your ice axe. Climbing most mountains is grindingly long hard work. It was when I was a teenager and now even more so at age 74. Now climbing is fueled by my passion to reach the summit. Standing on a summit was only an accomplishment then; now it is an awesome achievement! Little did any of us know then that this classic peak would be blown apart in 1980, destroying a perfectly good volcano and depriving us of the chance to climb it one more time. A mountain had died. 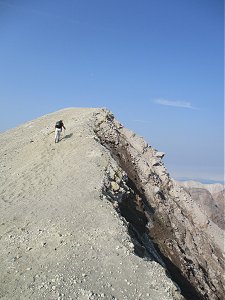 That passion brought me back to Mt Saint Helens, 56 years after my first climb. 2020 was the 40th Anniversary of the Big Event, so my wife and stalwart climbing buddy, Dee, went back up one more time. Today there is only one route – the Monitor Ridge route that leads to the summit via the south side. (The pre-eruption classic climbs on the north side were completely blown into oblivion in 1980.) It is a strenuous five-plus mile climb ascends 4500 vertical feet. It is Permits Only ($18 per climber purchased months in advance) and limited to 100 climbers per day. With the youthful resurgence of Mt Saint Helens passion, we slept at the trailhead under the stariest of skies. 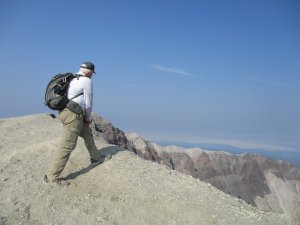 Starting at 5.00AM with headlamps, navigating two miles of dense forest trail in the heart of Sasquatch Territory and beginning the painstaking climb up Monitor Ridge were small sacrifices for the pursuit of this old favorite. The reckoning comes later in the morning, miles up the rocky spine with the final mile up a scree slope that somehow did not feel as ‘easy-peasy’ as decades before. Finally, after six hours, our persistence was rewarded. Reaching the top is humbling, but pure joy to any boomer. We were about a half hour behind the younger speedsters, but we were without doubt by far the oldest pair on the mountain. And that feeling is priceless! 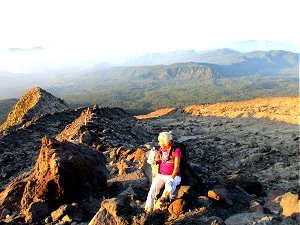 We have aged, but so has Mt Saint Helens. It is now much shorter, only a caldera, a semi-circular rock-walled basin surrounding a still steaming and growing lava dome. The dramatic new views make up for what’s been lost. The caldera walls expose multi-colored geologic layers from thousands of years of volcanic eruptions that built Mt Saint Helens. Standing on the rim you can easily visualize where the rest of the mountain used to be and understand the immensity of the eruption’s power. You can look north and see exactly where the top 1300 feet and core of the mountain simply blew out and settled. Steam rises from the lava dome and a budding glacier has formed in the base of the caldera. Spirit Lake has been pushed miles away.

I should note that our advantage is that we have kept active and pushed our limits each climbing season. Still, much of climbing is mental, committing to reach the summit and pushing through the aches and pains of age. We can take care of those afterwards; they will be forgotten in short order. Memories of the summits won’t ever fade. 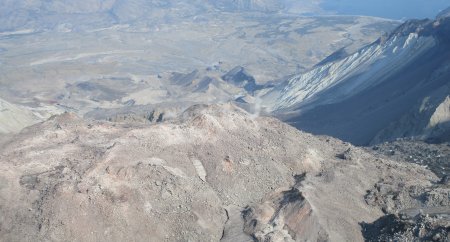 So, this aging climber will press on and upward. Age may change which mountains I can achieve, but never that there aren’t some that I can still summit. And live to brag about.

Fitness – Fabulous in Your Fifties and Beyond!