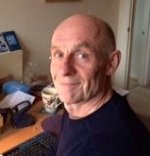 XJohn Percival Background:
John Percival is a semi-retired Research Associate at Bristol University, UK. and has worked predominantly in the fields of social care, health and housing. He has led studies examining older people’s housing needs; the uses of assistive technology for people with disabilities; end-of-life care in nursing and residential care homes; the impact of vision impairment on the social inclusion of people with sight loss, and the views of people with depression receiving different treatments. His book about return migration, "Retirement Migration in Later Life: International Perspectives", is published by Policy Press and is available from amazon.co.uk and can be bought as a hardcover or ebook. You can contact John by email.

‘My dread is that I will die before returning’. I read this heartfelt proclamation on a BBC (British Broadcasting Corporation) website message board, which had invited responses to a TV programme about ‘The ten pound poms’ – British citizens who emigrated to Australia in the 1960s and 1970s under the assisted package scheme.  Clearly, one such individual had a strong wish to return ‘home’ in later life. Intrigued, I sent a letter from my home in England to the editors of two Australian newspapers, inviting relevant readers to contact me with their views on the subject of return migration.

I soon received emails and letters from over 50 older people, as well as a few care service providers.  These replies included biographical accounts and personal reflections. Nearly all correspondents were ‘torn’ by conflicting emotions as they considered whether the land of their birth and childhood, or their adopted home where they had worked and in many cases raised families, was the place to fulfill retirement plans and pass their final years.

Initially, through email and occasional phone contact, I followed correspondents’ deliberations, including those of four correspondents who subsequently returned to the UK. Eventually I decided to carry out face to face interviews with many of the respondents, either in Australia, or here in England where I live.

Before I say something about what I discovered during my interviews, I should say that I had personal and professional reasons for exploring this theme of return migration. During the course of my work as a social worker and university researcher, I occasionally heard older people talk of a longing to return to live in the town or village of their birth or childhood before the end of their life. At the time I simply thought this to be rather curious but as I myself grew older and approached retirement, the notion kept recurring in my mind. My curiosity grew more intense, however, during a visit I made to Sydney, Australia, the city of my birth and early childhood, to present a paper at a gerontology conference. Although not having set foot in that country since childhood thirty years previously, on leaving the airport and travelling through the city I suddenly, and unexpectedly, had an overwhelming feeling of being ‘home’.

How could this be? My wife, children and grandchildren lived in England. My career and social life was rooted in that country. And yet, as I sat in that taxi looking out at the Sydney streets, seeing the particular shade of blue in the sky and hearing distinctly foreign birdsong, I knew I had reconnected with an intrinsic part of myself.

What I learned from my correspondents was that there appear to be at least four important themes that help explain emigrant retirees’ motivation to return to their country of origin: family reconnection; inclusivity and belonging; memory and magnetism; and cultural landscapes.

A number of those I interviewed in Australia told me of their desire for re-connection with siblings and other family members in the UK. They talked of the mutual support and close friendship that would consequently be available and how the younger generation in Australia could not provide this, being busy with their own lives.  People also said that this interest in living near to family in the UK was more acute if there were no siblings or family of similar age in Australia, or if widowed or otherwise alone, as suggested by one retiree:

I find when I return to England my social life improves, my father is still alive and I have three brothers and a sister…[and] friends who for varied reasons are single like myself.

Some interviewees told me they had never really settled or felt accepted in Australia, despite the decades living there. Others talked of always feeling English, Scottish or Welsh, and not truly belonging in Australia:

Australia has been very kind to us but my wife and I still seem unable to get England out of our system..Each time we visit it seems harder to return…we have many friends [in England] with a depth of friendship we don’t have and never have had in Australia…It is very hard to lose one’s Englishness.

When considering the idea of return migration, many retirees mentioned childhood memories and cherished moments, evoking a sense of ‘home’ that people keep in their minds, an important link with their native place and one that carries deep emotional resonance. A number of the retirees used the word ‘magnet’ to describe a homing instinct that was a strong and almost overwhelming force:

When I return [from the UK] I cannot look at photos I have taken, I miss it so much. It seems to be like a magnet, calling me back.