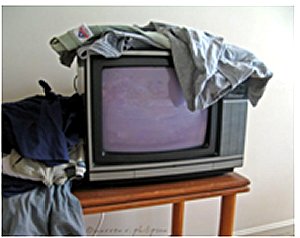 Who knew television viewing would change with retirement? I could just write, “We now have high definition TV–HDTV! And a streaming device!” But you’d never know about the radical change, the loss my father-in-law “Muns” suffered or TV service providers’ weather reports.

Before we retired, my wife Vicki and I had a TV, three actually. That’s a red flag to acquaintances who have none, but it’s also misleading to TV junkies because we only had one cable box, without which we couldn’t see anything on the one connected set.

One of the unused sets was a portable that hadn’t been turned on in, I’ll guess, 20 years. The other unconnected set–I forget why our son didn’t take it when he moved out after college.

Although I don’t consider TV to be Minow’s “vast wasteland,” there are lots of popular shows that escaped my viewing–Seinfeld, The Simpsons, Friends, reality shows. Oh, I did see a clip from the reality show Teen Mom that had my first cousin-once-removed. She wasn’t the teen mom (whew!); she was the therapist assisting the teen mom.

Long ago and far away, I might watch M*A*S*H, Cosby, Hill Street Blues and St. Elsewhere. Then I ran out of time, especially after moving to the Washington, D.C., area, where my work schedule shoved evening TV out of bounds. My only regular TV fare was the news and start of sporting events.

After we learned about Netflix, Vicki and I endeavored to catch up on missed shows; however, we didn’t endeavor very hard. Typically, we would set aside a weekend evening for DVD-watching, interspersing movies and TV shows. We got through most of the first episodes of 30 Rock and Boston Legal. We did much better with West Wing.

After retiring, we moved to the hinterlands of Wisconsin to be near Muns and live in an apartment over his garage. Nothing much changed in our TV viewing, other than adjusting to Central Time, until Muns’s Satellite TV service provider, which also fed our TV, dropped The Weather Channel (TWC).

Though Muns couldn’t give a hoot, I was distressed. Lacking a local 24-hour news and weather radio station, I had gotten in the habit of turning on the TV while exercising before predawn jogging. If I tuned to TWC and pushed the correct button on the remote, I would learn the current weather for our zip code and know what to wear.

Losing TWC was my tipping point for:

Action 1: Buying a tablet computer. I didn’t (and don’t) have a smartphone, couldn’t see turning on my desktop computer for a weather report, and had been thinking about adding a tablet anyway.

Action 2: Buying a video streaming device and dropping DVDs. I can’t think of a link with losing TWC, but you see where this is going.

Shortly thereafter, Muns’s old HDTV began taking at least five minutes to realize it was turned on. Vicki schlepped the set to a trusted repair shop and was told the TV’s internal power source was failing and not worth fixing.

Bottom Line 2: Vicki learned that for a new HDTV to function properly,the Satellite TV service provider would have to install a new receiver and raise the level (read: cost) of service.

Hmmm, Vicki wondered. Is it time to change Satellite TV service providers? I was delegated to determine which TV package we would need if we switched to the service provider that still offered TWC.

To receive the 5 or 6 channels I watch, we would need the 290-plus channel package–funny how that works. I lacked comprehensive information on Muns’s viewing habits, yet how could 290-plus channels not do the job? After further due diligence, Vicki bought a new HDTV and switched providers. Installation went smoothly, the monthly cost was lower and I got my TWC! 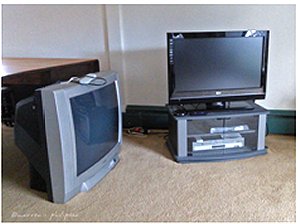 Exactly one week after the new service provider’s installation, our 10-year old, non-HDTV stopped working. Rather than rush out to buy a new TV, we replaced it with Muns’s failing HDTV. As that set culminates its death throes, we are becoming adept at turning it on several minutes before we’re ready to watch.

High definition is great! Streaming would be great, too, if what’s available weren’t so limited. One of these days, I’ll have to skip the news and check out those other 285 channels. After all, I’m retired now.