Retirement in the Dominican Republic

XLindsay de Feliz Background:
Lindsay de Feliz was born, raised and educated in the UK, where she worked as a marketing lecturer and was Marketing Director for various financial service companies.
She then decided to follow her dreams and travel the world as a scuba diving instructor, ending up in the Dominican Republic.

She fell in love with the country and its people, eventually met and married a Dominican and has been living there for the last 11 years working as a writer, translator and marketing consultant.

Her book about her adventures in the DR, “What about your saucepans?” is available from Amazon in both paperback and Kindle versions.

You can reach Lindsay via email at:

The Dominican Republic is part of a Caribbean island called Hispaniola. It takes up roughly two thirds of the island with the other third being Haiti. The country’s area at 48,730 km² makes it the second largest country in the Caribbean after Cuba. The capital, Santo Domingo, is situated in the middle of the southern coast on the Caribbean Sea.

Due to its size, the Dominican Republic consists of much more than purely beaches, even though there are over 1600 kilometers of coastline. The interior of the country is very diverse with mountain ranges, fertile plains, deserts, and rain forests. 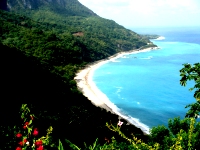 The highest mountain range in the Dominican Republic – indeed, in the whole of the Caribbean – is the Cordillera Central which has the four highest peaks in the Caribbean, the highest of which is Pico Duarte (3,098 metres/10,164 feet). The area around Pico Duarte is known as Dominican Switzerland, with rolling green hills, a thriving agriculture industry and temperatures significantly cooler than the rest of the country.

The Dominican Republic is an attractive place to retire, as the cost of living is less than in North America and Europe, and many people also come just for the winter months, due to the climate, which is tropical all year round. In addition there are direct flights to North America and Europe, and with 6 international airports it is easy to arrive close to where you live.

Expats on the whole tend to live where other expats live, which is the north of the country, Puerto Plata, Sosua, and Cabarete where there are international supermarkets, gated communities and several international restaurants. However the new boom area is the east coast, Punta Cana and Bavaro which has overtaken the north coast as the main tourist center and has a major international airport with more flights than the north. Over the past few years the number of amenities has increased dramatically in the east. There are also expats in the capital, Santo Domingo and the second biggest city, Santiago, who are more likely to be here for work rather than retired. Las Terrenas and Samana in the north east peninsula are also home to several expats, especially French. There are also a growing number of expats who prefer the mountains to the beaches and they can be found in the town of Jarabacoa in the center of the country.

In order to retire to the Dominican Republic, it is not essential at the moment to have residency, although the rules are constantly changing, and it is probably advisable to take it out. The process must be started in your home country. Simply go to the nearest Dominican Republic embassy or consulate and provide the necessary paperwork, which includes financial information, birth and marriage certificates and a passport. They will arrange for everything to be translated into Spanish and stamp your passport. On arrival in the country you can finish the process at the Immigration office in the capital, Santo Domingo. You will then be issued with a temporary residency which lasts a year and is renewable annually. Following three renewals, it is then made permanent and only needs renewing every four years. Along with the residency, you are also issued with a cedula, or identity card.

For those who do not want to go through the residency process you can simply purchase a 30 day tourist visa when you enter the country, and should you stay longer, pay an overstay fine at the airport.

Putting the ‘GRAND’ in Grandparent

True Confessions of a Downsizer