January 12, 2017 |  Category:   Humor, Life  |  4 Comments
Author:   Nancy Engel  posts:  1    Author's   bioXNancy Engel Background:
Nancy Engel earned a B.S. in Journalism and worked in publishing for more than 35 years. She was the managing editor of Popular Photography magazine and an associate editor at Fine Gardening magazine, where she wrote and edited dozens of feature articles. She wrote five chapters of The Resourceful Gardener's Guide, published by Rodale, and several hundred weekly columns for the Poughkeepsie Journal. Nancy also edited 14 gardening books, overseeing the process from recruiting authors through production and bound book. One of the first books she edited won a design award from the Garden Writers Association.
Dr. Ned Engel is a licensed board certified psychologist who has had many articles on creating systemic change published in professional journals. He believes in the therapeutic power of stories and has presented at conferences in the United States and Canada. He holds two doctorates, a Ph.D. and an Ed.D. The American Board of Professional Psychologists awarded Ned the Diplomate in school psychology. He is a life status member of the American Psychological Association and a fellow in the American Academy of School Psychology.
Ned has always incorporated stories into his practice. He served as a senior supervisor for both clinical and school psychologists. While he was teaching Master’s level school psychologists, he helped his classes create several therapeutic board games for children and adolescents. Western Psychological Press publishes their “Solution City” and “Puzzled.” You can find the games at www.creativetherapystore.com.
Ned and Nancy enjoy playing their guitars together, as well as canoeing, hiking, biking, skiing, swimming, yoga and target shooting.

Please visit their Einstein Meadows website. You can read the first chapter of their book on the site.
You can also reach Nancy and Ned via email.

You can find their "Einstein Meadows: The Unspoken Perils & Thrills of Living in a Retirement Community" book at Amazon. 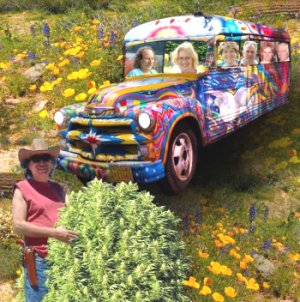 Have you ever dreamed of writing a novel, then having it become a best seller and maybe even a blockbuster movie? Well, that was my husband Ned’s expectation since I spent my career as a writer and editor for popular newsstand magazines. When you retire, you could have more time, and you may want to fill that time with useful and meaningful things.

Writing memoirs is a popular pastime for seniors. Many retirees want to document their experiences (while they can still remember them). However, we decided to add a twist to this idea; we wrote a fictionalized memoir.

Ned had such confidence in my writing skills that he had been nudging me for years to write the Great American Novel so he could retire early.

On the other hand, I had zero confidence in my ability to write fiction. Give me something to research or someone to interview any day.

But, writing dialog and creating something out of my imagination? The very thought of it terrified me.

Ned ultimately decided to write the novel on his own. He wrote the first two chapters and abruptly handed it off to me. He told me he was tired and, since I had helped him with the outline and the character development, it was my turn. He left me no room to wiggle out. Later he acknowledged he had feigned writer’s block to get me to write.

Nevertheless, last year, my husband and I co-wrote Einstein Meadows: The Unspoken Perils & Thrills of Living in a Retirement Community. We consider it a fanciful and humorous look at retirement communities. It tells the tale of a daring group of seniors who throw caution to the wind and embrace ganjapreneurship.

Although this book was our first foray into fiction, we discovered we had a real talent for it; and we both thoroughly enjoyed the process. We didn’t start out with any particular format or genre in mind, and the result is unique. We simply had a story to tell and wrote it.

What makes our book unique:

The finished product is so original that a producer offered us an option on a movie/TV series only three weeks after we published the book. Although we couldn’t agree on financial terms with the producer, we did write the pilot for a TV series. Now we’re looking for a producer. Anyone have a referral?

Einstein Meadows teetered on the cliff of bankruptcy soon after Ned and Nancy moved in. Faced with a major loss of services, the idealistic New Yorkers attempted to convince their neighbors of the wisdom of applying for a medical marijuana dispensary license. After many hilarious debates and endless committee meetings, the couple ultimately convinces their neighbors to grow and sell medicinal marijuana.

Today, less than three years later, this southwestern enclave enjoys 100 percent occupancy, no Homeowners Association dues, and a waiting list for new residents. Plus, everyone became multimillionaires. Amazing!! The enlightened Einstonians ride around town in a Woodstock bus, create a circus troupe and get naked, but not before they shoot it out with banditos who try to steal their crop. How did this happen?

Of course, this is a fictional tale. We wrote about what could have occurred – not what actually transpired. In reality, the idea never got any traction – largely because of the source: newbie New Yorkers from the low rent district (that would be Ned and I). We lived in a townhome while most of the residents lived in villas. The idea of a marijuana dispensary was too much of a stretch for our neighbors (people who were a generation older than we were and who truly believed the movie “Reefer Madness”). It was mind-boggling that such brainy people with backgrounds in academia could be so limited in their thinking. It just shows that having a Ph.D. after your name is not a guarantee of commonsense. However, we made it happen in the book.