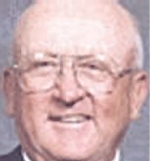 XGerald Krueger Background:
I grew up on a farm near Wetonka South Dakota. Educated in Aberdeen South Dakota, College at Northern State University in Aberdeen. Coached and taught a year before entering Navy Flight Training. Was a Navy Fighter Pilot after receiving my Navy Wings for 3 years. Came out of the Navy and taught at Ipswich South Dakota, then 3 years coach and teacher in Aberdeen South Dakota. Began a pilot job in 1968 with Northwest Airlines retiring in 1995. In 2000 began writing a weekly column for the Aberdeen American News. My wife Mary Ann and I have been married for 55 years. 3 children. Cheryl a 3rd grade teacher, Merilee a University Professor at U of Missouri Rolla. And son Skip(Gerald Jr.) a producer of professional sports games for Fox Sports North. 5 grandchildren. Still own the Krueger Farm which was homesteaded by Grandfather Will Krueger in 1904. Am active in Church activities at St Mary's church in Aberdeen. Been living in the same house which we built 42 years ago.

Please check out my articles at the Aberdeen News. You can also reach me by email

After receiving my Navy Wings of Gold I thought my training days were over and it would be lots of actual flying to become an experienced pilot. Well that wasn’t exactly true. 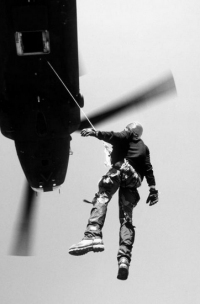 When I arrived at my new squadron the first thing they assigned me to was to spend 10 days on survival training. An edict had come down from ComNavAirPac (Commander Naval Air Pacific) that if you were involved in any type of aviation crew status you must complete survival training.

The 10 days to come were some of the most miserable moments ever spent by this fledgling Navy pilot. We reported for duty with a toothbrush and toothpaste and that was it –period.

We spent the first day being briefed on just what the next 9 days would be like. That night we spent on the beach near San Diego with nothing to eat. The next morning we were dumped into San Diego bay and it was Cold. It was November and even though we were in mild climates, the water had to be around 50 degrees or lower. The first thing that happens as you are dumped off a boat doing about 30 mph and your breath just leaves you and the next thing you know there is a helicopter hovering over you making a wind that sucks your breath away. So, you crawl into the collar as we were taught to do and hoisted up and into the helicopter.

We ended up in the mountains above San Diego affectionately called the Warner Springs Youth Camp.

That first night we tried to avoid capture running through “enemy-territory”, but of course after about an hour I was captured and held in a stockade.

The next day we were issued a parachute for 6 guys, each officer was put in charge of 5 other men, issued a snake bite kit, and each member was also issued a ½ parachute. We had a compass to navigate by and were told that there was free “lunch” and drink on the other side of that mountain. So we set off and it began to rain. Miserable cold, tired, and nothing to eat for days made the day miserable as can be. My men were just great, each carrying their load. So we continued our long up and down hike to safety. We finally reached our final destination about dark. Someone caught a squirrel but it was diseased so it was taken away from us and we were issued one can of hamburger for 39 of us. We were issued water and a fire to cook up the 1 can of hamburger. Never tasted so good. The rain continued and we spent the night inside our parachute while wrapped up in our ½ parachute.

The next morning around sunrise everything was taken from us and we were told we had to avoid capture and run through this gauntlet of guards. I was caught within an hour and subjected to the worst humiliating treatment ever. We had to strip naked, crawl around this compound on our hands and knees. We were all confined to a stockade and we were constantly harassed. Even for a drink of water. We were subjected to interrogation and then put into a very small box and a lid latched over the top. It was in this box that I learned a lot about my endurance and handling deprivation. It was a defining moment in my life.

Some others had forewarned us about “The-Box”. It was such tight quarters in there that you had to curl your arms underneath you, butt your head into a corner, then this giant timber was placed over the door and there you were ‘stuck’! We were told the first few minutes would be tough. Until your feet/legs/arms/hands went to “sleep”! the urge to move gets quite strong and there is no movement.

When I was taken out of the box I was shoved into interrogation. Brilliant bright lights were shining on me and I guess there were guards behind the lights but I never saw them. I noticed an object right beside me, and suddenly it dawned on me it was a casket? Of course they asked me all kinds of questions and I just kept repeating my name, rank, serial number and date of birth. Then the threats of death and punishment came, but finally I was taken outside again and this tiny little box had a swinging door on it and as I stepped inside there must have been at least 6 other prisoners in there. How we all squeezed in there is still a mystery.

We were finally released on a Saturday morning. Looking like refugees we were all dirty, tired, hungry, and mighty glad to be finished with such a grueling ordeal.

The Sharpest Tool in the Shed