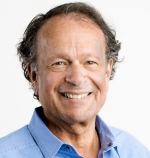 XKen Solin Background:
Ken Solin is a Dating Expert for The Huffington Post, AARP, About.com, and Maria Shriver. Ken also writes about boomer sex and relationships.
Ken’s new book, The Boomer Guide To Finding True Love Online offers real-life boomer dating solutions based on Ken’s online dating experience and the experiences of tens of thousands of readers who have commented on his articles. His relationship philosophy is simple. “You can’t think your way through a relationship. You have to feel your way.”

I met John Gray, best selling author of Men Are from Mars, Women Are from Venus for lunch recently. His continued passion for his work is palpable. We covered quite a few topics related to sex, dating, and relationships over two hours. But his work regarding ADHD and boomer relationship commitment, the topic of his new book, Staying Focused in a Hyper World are fascinating and fresh and are the primary focus of this article. Here’s some of what John had to say.

“ADHD is epidemic in America. One out of five boys, is diagnosed with it. The real number is greater but many parents just don’t want to believe it. Autism is an extreme example of ADHD. In addition one out of four women, in America is on an antidepressant. There are reasons and solutions for both.”

“ADHD shows up differently in our adult lives. In children it’s visible as hyperactivity and restlessness, but what’s fascinating is that a hyperactive child that sits in front of a computer is able to focus and stay focused. Staying focused in a hyper-world is the challenge for adults too. Men’s commitment issues are related to hyperactivity. A man meets a woman and is stimulated by the newness. But when familiarity develops he frequently feels he can no longer focus and commit. It’s more exaggerated in men married twenty years or more. Their ADHD becomes so powerful that some men can’t even look at their wives at the dinner table.”

“ADHD drugs only work short-term for children and after one-year need to be doubled to remain effective. This is also true for adult drugs and the phenomenon is called brain habituation, which means the brain no longer responds to dopamine stimulators. A Rolling Stones concert for instance is exciting and stimulates the production of dopamine. But by the next morning dopamine levels are depleted and the result is that you feel a bit down or flat. But your energy levels eventually come back. If you get over stimulated all the time then normal life becomes boring.”

I asked John if ADHD in men in relationships is an issue today.

“It’s rampant and the reason is that we’re living in a hyper world. Hyper stimulation comes in and we enjoy it, but our ability to enjoy normal stimulation decreases. So we’re drawn to more hyper stimulation. An example is when I look at my emails and get good news, then the brain keeps going back looking for more good news. Our brains are constantly being over stimulated by the world we live in today. Our brains become addicted to that high level of stimulation. Normal stimulation no longer has a strong appeal. Electronic stimulation produces huge quantities of dopamine. An example is a child who can’t listen to his mother but will be completely enthralled if you put him in front of a computer.”

“A new relationship with a woman is like your brain on heroin. Familiarity that is positive produces serotonin, which is comfort as opposed to new and exciting. We need the sense of certainty and uncertainty in life. This is a reflection of the two major brain chemicals, dopamine, which makes things new and exciting, and serotonin, which give us the support that we need. We become comforted and at ease with serotonin.”

“I’ve focused on this chemical balance in the past but never regarding how it affects relationships. My new book explains this phenomenon extensively.”

I wanted to get John’s reaction to an article I wrote in Huff/Post 50 last year about why men need to be emotionally honest with women that garnered 2,100 comments, which is substantial for a non-rock star article. While I champion men being emotionally honest with women in relationships I always remind women that their role in that dialogue must be supportive and never angry, judgmental, or opinionated if they hope to have future conversations about the emotional aspect of their relationships.

John was clear, “I completely agree with you, and women feel exactly the same about how they’re treated when they share their feelings with a man. To me, women are much more vulnerable than men are but may not show it even though they want men to be. Back in the 80s women insisted they wanted an emotionally available man. I’ve taught men to be emotionally available only to have women tell me afterward that they wanted a divorce. When I asked why since they got what they’d wanted, their response was I love him more but I didn’t know he had so many problems. I feel like he’s a child, like I’m his mother. Ever since you taught him how to share his emotions he shares them all the time.”

“What’s clear is that men and women shouldn’t rush into sharing everything that comes up for them emotionally all at once. Similarly a woman on a date who shares every feeling she’s experiencing with a virtual stranger will turn that man off. It’s just too much. And I counsel men that sharing their emotions depends on whether a man can hold his emotions inside and understand them and then share them in a responsible way, which means not to throw them at a woman but rather to inform a woman and not with the intention of intimidating her. The conflict arises when women share their emotions to elicit guilt while men may tend to intimidate. Those intentions will not have a positive outcome.”