XCynthia Pittmann Background:
I live (and still work) on the gorgeously lush island of Puerto Rico. My husband, two children (now college-aged) and I moved from San Diego, California to immerse ourselves in the local island culture, learn Spanish and get to know his side of the family. We thought we’d try it for a few years and now find that we are still here twenty years later! We are both active university professors though I’m directing now and only teaching one class - Journey in Literature, which is a course in travel literature. (My PhD is in the Language and Literature of the English-speaking Caribbean.) I enjoy writing for various venues, painting, inventing vegetarian recipes inspired by local meat-based dishes, and have an intense interest in understanding people. With an eye towards having a long healthy life, I practice yoga, walk every day, and often hug my four-legged friends.

The photograph of me was taken in front of the Condado Lagoon (Laguna del Condado in Spanish) by my husband Wendell while we were taking a break from our regular long walk down the length of the beach.

Visit my personal blog at Oasis Writing Link ™, read my poetry at Cynthia Pittmann’s Blog, or find me on Facebook or on Twitter @ Oasislink.

You can also reach me via email

If you expect life in Puerto Rico to be a paradise and that’s why you’re considering retiring here, think again. People who live in Puerto Rico are real people with real lives. If you want to have a satisfying lifestyle here in Puerto Rico, you have to either be flexible or have a strong desire to develop this characteristic. 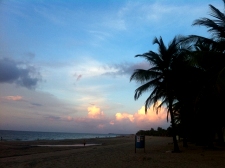 It’s not easy to prepare for life in Puerto Rico unless you are familiar with the culture. Do you remember the beginning of the movie, “The Descendants” where the main character Matt (played by George Clooney) says: “My friends think that just because we live in Hawaii, we live in paradise. We’re all just out here sipping Mai Tai’s, shaking our hips and catching waves. Are they insane? Do they think we’re immune to life? How can they possibly think our families are less screwed up? Our heartaches, less painful?” Similar to Matt’s idea about people who live in Hawaii, island life in Puerto Rico is life in the real world – piña coladas and all- and it’s complicated.

Though Puerto Rico has had a hundred (plus) year long relationship with the United States, it continues to be unsettled. Puerto Rico has a government that functions much like a state but it is classified as a Commonwealth or territory. People here are legal citizens of the United States and consequently, have unlimited travel to the US without a visa. Often many Puerto Ricans live for some months in the US and then go back to Puerto Rico for the rest of the time. Families frequently travel to visit relatives in the US and vice versa. Some Puerto Ricans work in the US for an entire career and then decide to retire on the island and conversely, others will move to the United States for retirement.

Puerto Ricans are citizens but do not have a right to vote for the President of the United States. If they move to the US, they can automatically vote in a presidential election. However, Puerto Ricans can vote in the primary elections. In fact, the last time a nomination was held, Hilary Clinton was chosen as the Democratic candidate. Puerto Ricans are extremely political and have a high percentage of active eligible voters. Sometimes people from the US come to Puerto Rico and assume that everyone wants to be a part of the United States but this is not true. There are three prominent parties in Puerto Rico – the Statehood, Commonwealth, and Nationalist parties. Respectively, the first party, would like to become a state in the Union, the second would like to maintain the status quo, and the third party members prefer independent governance. It is possible that in one family there will be members who vote for any of the three parties.

Puerto Ricans proudly remember their more than five hundred year history of cultural development. Before the US arrived to claim the island in 1898, the Spanish had inhabited it for nearly four hundred years. In fact, resistance to the Spanish colonial government continues to be celebrated by many Puerto Ricans on the holiday, Grito de Lares (Cry of Lares) on September 23, 1868. Though not all political parties recognize this day; historically, the University of Puerto Rico does consider it to be a national holiday and often the campus is closed. Considering holidays – Puerto Rico celebrates all the traditional United States holidays as well as nine Puerto Rican holidays – a fact that can make for unexpected closures at the bank or government offices if you are uninformed.

Because of the country’s political history, most people speak a bit of English but everyone speaks Spanish. That means that all business transactions will be conducted in the Spanish language first but often someone is around to help you in English. Buying a home, going to the doctor, solving an insurance or tax problem will probably be conducted in the Spanish language with a bit of English thrown in; however, official documents will probably be in Spanish. This means that you can buy property in Puerto Rico (with US currency) but the transaction will likely need to be facilitated by an agent who is proficient in both languages.

How Living “The Good Life” is Easy in Costa Rica