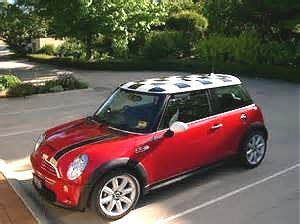 Several years ago I decided to celebrate my retirement with a new car. My wife and I had been sharing one, and I’d hesitated to purchase another for my exclusive use because we lived downtown and parking was difficult. Our house was nearly a hundred years old with a narrow garage carved out of the basement. Our current car left little room for tandem parking—until the Mini Cooper arrived on the scene.

I fell in love with the look of this toy-like car, and my wife and I drove to the dealership for a chat with the gregarious salesman, a young fellow with a devilish sense of humor named Jerrod. I wasn’t surprised when Jerrod informed me that selling cars wasn’t his true aspiration; he loved books by Stephen King and Dean Koontz and aspired to be a writer of horror fiction.

We discussed writing for a while, and then got down to business; he showed me a chili red beauty with a black and white checkered roof. There was normally a two month wait for Mini Coopers at the time but this particular car was available because someone had custom ordered it only to have their financing fall through. We took the car for a test drive. I loved how it handled on the road and how spacious it was inside for a small car. But I did have a concern.

“Jerrod, I like this car enough to buy it, but I don’t know if it will fit in our narrow garage behind my wife’s car. Trying to find street parking downtown would be a nightmare, and other cars would ding it while jockeying around in tight parking spaces. I need to borrow this car for a test.”

“Yeah, I need to park it in my garage and see if the door closes. At the time, this was the smallest car on the market and by my calculations the door would close with an inch and a half to spare, but I needed to be certain.”

“I can’t let you take the car unless I go with you,” Jerrod said.

“Why, I’ll leave my wife here as collateral.”

My wife overheard our conversation and gave me the stink eye, but didn’t object.

Jerrod shook his head. “I still have to accompany you.”

I’m an inveterate jokester and decided to match my devilishness with Jerrod’s. Playing off of his interest in horror fiction I said, “If I were you, I’d be a lot less worried I’d steal your car and a lot more concerned I’d slice you into little pieces when I got you home behind my closed garage door.”

I almost felt guilty pulling his leg. “Of course I’m joking.” My wife turned up the dial on that stink eye.

He and I climbed into the Mini Cooper and drove the short distance to our house. Just as I’d calculated, the door closed with an inch and a half to spare. With the door down, an uncomfortable looking Jerrod glanced around for an escape route while saying, “So, we have a deal, right? You’ll buy the car?”

“Sure I will.” I beamed a megawatt grin at him. “Right after I slice you into little pieces.”

The look on his pale face was priceless, but I realized, perhaps too late, that my joke bordered on cruelty.

“I’m just fooling with you.” I confessed, but I’ve given you an interesting scenario for a horror plot—serial car buyer is also a serial killer.”

“Thhhanks?” he sputtered, eying a basement window as if wondering how fast he could break the glass and squeeze through it. He sighed with relief when I pushed open the garage door.

Later, my wife dialed her stink eye to maximum when I told her how I’d teased poor Jerrod. Even though he’d received a nice commission for selling me the car, my wife insisted I atone for my questionable humor by referring Jerrod to all our friends. Like I said, I almost felt guilty.

I’m still waiting for Jerrod’s first novel to be published, probably a story about a fat bastard with a big mouth who ends up chopped to pieces while taking a test drive in a Mini Cooper.

We need to talk

On the road with Habitat for Humanity