July 24, 2016 |  Category:   Health, Life  |  Add Comment
Author:   Michael Dorgan  posts:  1    Author's   bioXMichael Dorgan Background:
Michael is a British TV documentary filmmaker who runs the production company Go Forth Films. He was born in South Africa and grew up in London. He has a Masters from the world-renowned London Film School.

He recently completed the documentary The Grey Escape, which is available for purchase at: vimeo.

Michael’s documentaries span issues such as health, ageing, fitness, environment and geopolitics. He recently completed an 8-part series on dementia, called The Memory Team, which aired on TV in the UK.

He has also been in front of the camera, running 8 marathons in 8 days to see how good running is for us, as well as investigating the socio-economic and health effects of palm oil, an ingredient in 50% of all our food. 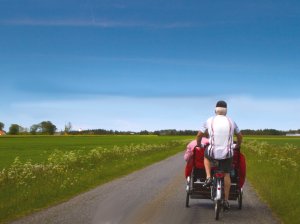 I, like many people in their twenties, felt that old age was a very long way away. And that elderly people didn’t experience the same emotions and desires as us youngsters. But, in making a documentary about a group of elderly people in Denmark, I realized I was completely wrong.

I’m a British filmmaker and I’ve just completed a documentary called The Grey Escape (available on demand on Vimeo), which tells the story of a group of Danish care home residents on a cycling road trip to neighboring Norway to deliver rickshaws to fellow elderly people. The journey took five days and we covered over 250 miles.

The project started last summer when I visited Copenhagen and met the founders of the movement Cycling Without Age. They use specially designed rickshaws to cycle elderly care home residents around their local area, and sometimes to go on longer multi-day trips.

They started the movement after Ole Kassow, one of the founders, noticed that he kept cycling past the same 97 year old man sitting on a bench in his neighborhood in Copenhagen. The man, Thorkild, was particularly tanned and Ole thought he must have spent much of his youth outside. It turned out that Thorkild was a very keen cyclist and that only old age had stopped his cycling. 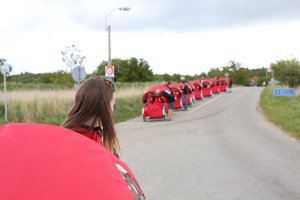 Ole found a rickshaw and started cycling Thorkild around town. A few years later, they still cycle together but Cycling Without Age is now also in 25 countries across five continents, including recently launching in the USA and Canada.

In meeting Ole and his team in Denmark, I visited many care homes and this is where my first prejudice was broken down.

Care homes are built is such a way as to protect elderly people from the outside world – whether that be from people of different ages or even the weather. For example, the corridors that join buildings are often covered with brick and glass, rather than being exposed to wind and air. I think this helps perpetuate the view that I held: we don’t enter a care home, unless we are a guilty relative of one of its residents.

Ole feels it is unhealthy to keep people locked away in care homes and that, as the movement’s slogan goes, whether you are young or old, you have “the right to wind in your hair”. He said he had noticed transformative effects in the elderly people he had taken out for rides in the rickshaws. The simple act of going outside, even if it’s cold, and having a chat with someone is incredibly powerful. He noticed the elderly passengers were happier and more energized each time they went for a ride.

After meeting in Denmark’s capital, we were ready for our cross-country trip to Norway. This is where my second prejudice was broken down. 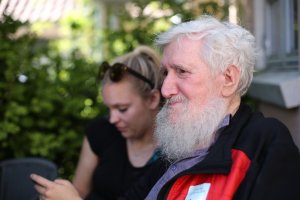 I was to make a film about the trip, but there were twenty or so care home residents from across Denmark, as well as about the same number of pilots. I decided I needed to focus on a few key characters.

Immediately one man stood out to me: Finn, an 81 year old former bricklayer. He was incredibly cheeky with a wicked sense of humor that would make Marie, my Danish translator, laugh uncontrollably, even when she was meant to be asking him very serious questions. Despite his sense of humor, he did mention that life in a care home is boring and that there is nothing to do.

My prejudice was that elderly people – like Finn, a widower – aren’t romantic. Romance was reserved for the young. Finn soon destroyed any preconceptions I had. As soon as we were on the road he took a liking to a 96 year old woman from Copenhagen. Although, at first, he claimed he couldn’t remember her name.

As the trip progressed, he charmed the woman, whose name is also Marie. He eventually decided that he wanted to marry her. Her response? He talks too much. 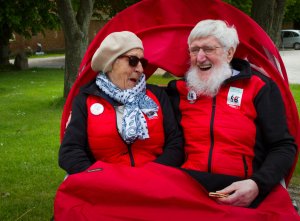 Over the course of the trip the pair grew closer, always laughing at each other’s jokes and constantly insulting each other. The Danes have a very dark sense of humor that even I, as a Brit, found pretty dark!

After five days of cycling and many eye-opening experiences, we arrived in the picturesque coastal town of Arendal, Norway, to an incredible welcome. The rickshaws were presented as part of a major event in the town and all the elderly people who had taken part in delivering them were given a standing ovation as a band played in their honor.

Shake It Off (retiree style)