XHarry Britton Background:
I recently retired from a Fortune 500 company.

I am trying to navigate my way through the retirement maze. So far so good.

It is funny how some things become life long obsessions while others come and go. 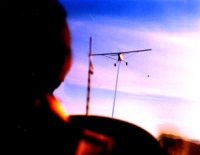 Such is the case with Flying for me. While I was obsessed with several things over the years including motorcycles (I owned a Triumph), nothing stuck like flying.

My earliest memory of an airplane was when my father bought a balsa glider when I was several years old. I flew it endlessly in our apartment. In the following years I pestered my father to go to various locations where people were flying remote controlled airplanes including Mitchel airfield on Long Island, NY.

Mitchel airfield was an Air Force base during WW1 and became an Air Defense Command Center during WW2. It was also the location where several aviation speed records were set and where Lt. General James Doolittle made the world’s first instrument flight (took off, flew and landed using only the instruments on his panel). The location was also down the road from Roosevelt Field where Charles Lindbergh took off in 1927 for his solo flight to Europe.

But I digress. By the time my father and I visited the field it was the early 1960s and the Air Force had moved to another location and today’s occupants (Nassau Coliseum, Hofstra University, The Cradle of Aviation Museum and others) had not yet arrived.

One day my father brought home an airplane kit that would be our entry into the gas-powered world of flight. This was not a remote controlled airplane. It was designed to be a free flight aircraft. The concept was simple. You add a little gasoline to the engine, set the rudder on the plane to enable it to circle while climbing and then when the engine ran out of fuel it would gently glide back down to earth.

We worked on that plane for a few weeks. Sanded the balsa wood, carefully glued it together, added a beautiful paint job and then mounted the engine. We decided that Mitchel field was to be the location of the first flight. There was plenty of space there and we could find a spot far enough away from the RC crowd to not interfere with their flights. We first added just a drop of fuel to the engine to test if it would fly at all. It did. We decided it was time. So we added enough fuel for what we estimated was about one minute of powered flight, started the engine and set it free. And free it was. The airplane circled and climbed into the hazy blue sky. I watched it and was doing a dance of joy.

We waited to hear the high pitch sound of the engine die, and it did just as planned at several hundred feet. But something was not right. The airplane kept climbing and slowly drifting north. I ran to try to stay beneath it wanting to be at the right spot when it returned but it never did come down. It just kept climbing and drifting away from the field. I watched it hoping it would change course and come back to me but it just became smaller and smaller until it was gone.

We realized the mistake we made. The airplane was caught in a thermal. The rising hot air that developed when the sun heated the asphalt on the field carried the plane with it. I was hoping that the plane made it over the Long Island Sound and that some lucky kid found it in Connecticut.

I don’t remember building any more model planes after that incident but I graduated to hanging out at various small airfields watching the planes take off and land.

I was lucky that my father also enjoyed the planes and we spent many Sundays at Zahn’s airport in Amityville watching students do touch and goes. We lived in Queens at that time and sometimes after school I rode my bike to Flushing airport to sit on the fence and watch the planes and listen to the pilots discuss their flights after they secured their aircraft.

For several summers the GoodYear blimp was stationed at Flushing airport. One day the pilot of the blimp saw my friend and me sitting on the fence and came by and asked if we wanted a ride. He had 2 extra seats. He didn’t have to ask twice. Luckily those were the days before every action required a parental signature. We were strapped in and ready to go. The engines on the blimp were incredibly noisy and you could not hear anything anyone said. But the feeling of breaking the bonds and lifting off stuck with me forever. The blimp was a slow moving behemoth, floating just above the buildings. It was surreal.

The Russians are Coming!

Leave Dr. Oz in the Land of Oz